To dump or not to dump

The Foreclosure Fraud Saga continues (tired of me talking about it yet?). Above is a great summary from FOX news.

The crisis isn’t easy to understand, but boiled down it basically comes down to this: Banks need proper documentation to repossess a home from a family. They need documents about everything from the family’s financial situation to its history of missed payments to its assets. And they need to verify that the information in those documents is correct. But they didn’t. They hired individuals to sign thousands of mortgage papers — legal affidavits, swearing to a judge that they had personal knowledge of the information within — without checking a thing.

Basically the banks committed fraud - on a massive scale. And they have been caught.

Bank of America has now suspended foreclosures in all 50 US states. And there are calls for all institutions in the United States to follow suit.

Janet Tavakoli, the founder and president of Tavakoli Structured Finance Inc, sounded some of the earliest warnings on the structured finance market. In an interview with the Washington Post she calls these developments "the biggest fraud in the history of capital markets."

Takakoli gives a wonderful synopsis. She observes that when the financial crisis broke out, the first thing the banks did was run to Congress and ask for accounting relief. They asked to be able to avoid pricing this stuff at the price where people would buy them. By allowing this to happen, no one can now tell you the size of the hole in their balance sheets.

The United States government has thrown a lot of money at the problem but TARP was just the tip of the iceberg. The US governemnt has given these banks guarantees on debts and low-cost funding from the Federal Reserve but a lot of these mortgages just cannot be saved.

Had this problem been acknowledged in 2005, the mess could have been cleaned up for a few hundred billion dollars. But that wasn't done. Banks were lying and committing fraud, and the regulators were covering them.

Now a bad problem has become a hellacious one.

The financial system is still very fragile. The fear is that these developments will be a disaster for the economy and will trigger another credit freeze. But Takakoli disagrees and sees a solution for the crisis.

Faithful readers will recall this blog has long said there should never have been any 'too big to fail' sacred cows.

It would have meant a very severe, painful and difficult recession, but correction could have started and the rebuilding begun in earnest.

Will we see a solution similar to what we saw in the Savings and Loan crisis? Or will bailouts continue to be the order of the day?

In that the Federal Reserve Chairman is one who has publically staked his reputation on the belief that the Great Depression of 1929 could have been prevented by dumping buckets of money from a helicopter, and that the US Treasury has staked the nation's wealth on the 'too big to fail' concept, I'm guessing the latter option will win out.

The realization of just how big this issue is has finally started to seep into national consciousness.

Enormous doesn't begin to cover it.

Worse, since the biggest banks have been deemed 'too big to fail', there is simply no way I see the Federal Reserve and the US Treasury shifting gears now. Therefore I doubt Ben will be setting the helicopter down anytime soon. 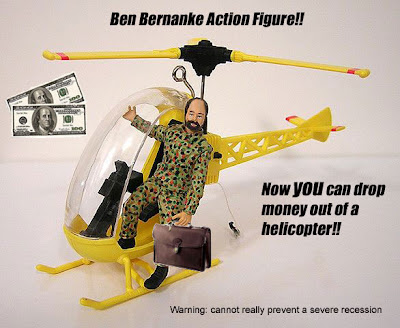