One of the rationalizations you often hear about the big collapses in real estate values in the United States is that those markets that are collapsing don't compare to Vancouver.

Vancouver, the R/E defenders chip, is a world class city. Therefore you need to observe how bad the 'real estate correction' is in those types of American cities.

Invariably New York City is one of those cities held up as an example.

Until recently, NYC had weathered the downtown moderately well. But it appears that the tide is starting to turn.

This is the Apthorp, a 1908 heritage building located on New York's upper West Side. 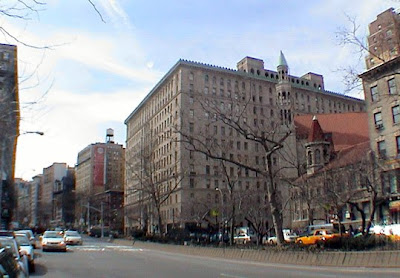 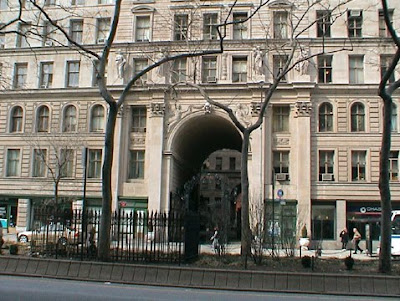 The Apthorp is a luxury building, elegantly detailed with elaborate wrought ironwork, a massive courtyard hosting a pair of fountains, marble benches, statuary and greenery. 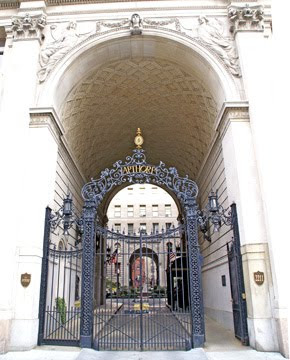 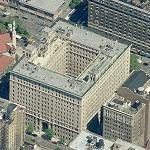 The courtyard's facades are rusticated limestone and the first and second stories have arched windows and each angled corner has an entrance to apartments. 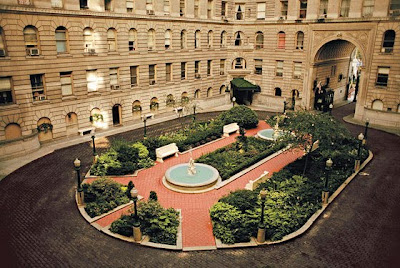 The complex was undergoing a massive luxury condominium conversion when the real estate market crashed. Struggling since then, the complex is finally succumbing to the new R/E economic reality.

According to this story in the New York Post, New York condos values are crashing headlined by developments like the Apthorp.

The Post is reporting that a one-bedroom penthouse in the historic building, originally offered at more than $2 million, was sold for an amazing bargain-basement price of around $200,000.

The building, plagued with strict state regulations regarding rental-to-condominium conversations, has been battling a number of related problems.

Conflicts with rent-stabilized tenants worried about losing their deals as well as declining services, including problems with elevators and electricity. New buyers have also said they couldn't get renovation plans approved.

The 763 square-foot home had been on the market for 13 months, according to real-estate-data site StreetEasy.com.

The real estate downtown has lead to similar deals in the Gilded Age-era building.

North of the Border

Meanwhile CNN has come out with a story titled "Canada's coming housing bust".

CNN notes that the greatest issue looming for our nation is our housing market which "has, despite a brief blip, continued to drive higher through the world's economic snow bank due to easy credit, low interest rates and encouraging government tax breaks."

The article troupes through all the arguments put forth by "believers in the Canadian miracle (who) say the country's housing market is not likely to have much of a correction at all, and certainly not the sort of housing swoon seen in the United States or Europe."

But CNN zero's in on the fact that our housing market is showing signs of strain and as housing prices level off after a decade of scaling ever-greater heights, the article focuses on the looming problem.

And, of course, in our little hamlet here in the Village on the Edge of the Rainforest recent date shows that the average homeowner with a two-story home spends 70% of their household income on mortgage servicing.

And now we are half way through the sixth consecutive month of the worst real estate sales totals in the last 10 years - despite the fact interest rates remain among the lowest in our nation's history.

It brings to mind something Paul Krugman wrote in the New York Times back in August 2005. He was talking about a possible looming collapse in real estate prices and said:

Krugman wrote this a full year before the concept of a Real Estate collapse was even on the radar screen of the average American.

In November of 2010 his words ring eerily true here. Indeed, the process here may have already started. And it seems everyone, except us, can see it.

Please read disclaimer at bottom of blog.
Posted by Whisperer at 3:37 PM