The world and it's view of Vancouver 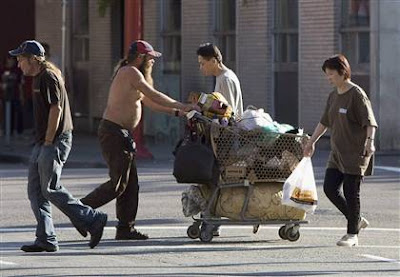 I have lived in this city for almost 40 years now.

And there is one thing that has always stood out for me... and that is the dramatically different perception you can have of this city based on the way you travel to the downtown core.

Drive down Granville or Cambie Steet, and the city rises up on a sunny day as a spectacular jewel nestled against the mountains.

Drive along Kingsway or Hastings, and the city is a slum.

That dichotomy will take on mythic proportions in the coming weeks.

I can't find the link right now, but I read one account of a journalist visiting Vancouver and he talked about his anticipation in seeing this fabulous city. But leaving his hotel in Burnaby, he would drive down Kingsway and loop around the downtown eastside, never finding the Vancouver of the travel magazines.

I know exactly what he means.

Next week NBC will broadcast Vancouver to the world. Now, Dick Ebersol (of NBC Sports) has already made it clear that the main network of the NBC will do nothing but display Vancouver in all it's stunning glory. NBC does that with every host city.

But contrast that approach with this article from MSNBC.

For those who think the Olympics will be a non-stop real estate advertisment for the Village on the Edge of the Rainforest, this is a taste of what many media outlets will be reporting this week.

MSNBC has taken a realistic, cold, hard look at the real downtown Vancouver. The view that so many locals simply refuse to acknowledge and put blinders on for.

Somehow I don't imagine excerpts of the MSNBC story making it's way into any Bob Rennie literature on the Woodwards development.

Please read disclaimer at bottom of blog.
Posted by Whisperer at 12:02 AM