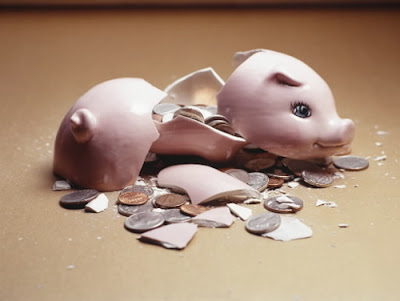 In 2008, when the Canadian housing scene started to seize up and contract, the federal government began throwing everything they could at the problem. After 15 years of digging our country out of a massive deficit, the Conservatives plunged the nation into it's greatest deficit ever with the stroke of a pen.

Every knows that we are now $50 Billion dollars in the red. But there is a massive amount of hidden leverage that is poised to crush the Canadian taxpayer.

The Bank of Canada lowered the prime lending rate to 0.25% in a desperate attempt to resuscitate the economy, and the real estate market.

And borrowing to buy houses has taken off dramatically this spring.

But while many banks were flogging that it was a great time to buy a home, did you know that not one of them has increased their mortgage holdings?

Between the beginning of 2007 and 2009 Canadian Banks increased their total mortgage credit outstanding listed on their books by only 0.01% (see CMHC chart below - click on image to enlarge). 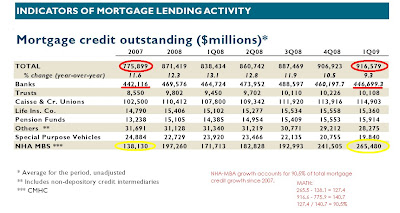 The reason may be found in the growing danger of holding these mortgages.

The only growth in real estate by our Canadian Banks in the last few years has been in the securitization of Canadian mortgages.

Banks have been very eager to package up mortgage debt and sell it off as securitized products.

But after the debacle that evolved in the United States from securitization (a practice that is credited with laying waste to the world economy), how can these products sell today?

They sell because, in Canada, the government of Canada insures 100% of any losses of a mortgage loan (not just the 20% down payment) through CMHC insurance. This means that mortgage securities are as secure as government bonds, yet pay a higher premium.

And just how profitable is the securitization of these Canadian mortgages for our banks? The largest market for Mortgage Backed Securities (MBS) is the 5-year fixed single residential home mortgage. The average term has swelled over the past two years and the majority of issues are for ams over 30 years. Some pools of MBS were issued at 9% but pay investors only 4% - a difference that represents how risky and profitable these loans are. CMHC charges 0.2% for the insurance, which leaves up to a 4.8% profit for the bank.

So banks are gung-ho to approve mortgages, but are not increasing their holdings (read their exposure of risk) to mortgages.

CMHC plans to expand securitization of debt to 370 billion by the end of 2009 as per the conservative government's request.

All of these securities are traded on an open exchange and insured by the Government of Canada.

Is it any wonder so many first time buyers are having their banks preapproved their mortgage requests? Many individuals are being granted 500-800K for their first home purchase if their household income ranges from 110-170K.

And why not? The banks don't care. You either qualify for securitization or you don't. Their is no emotion or extra thought put into the loan by the bank since it bears zero risk. Investors don't care who you are since the security is backed by the government.

This situation is stunningly similar to the one that evolved in the United States from 2002 - 2006. A mad rush of mortgages were issued because everyone was profiting from securitization, but none of the front line institutions bore any risk.

When Canadian real estate began to nose dive (losing 10% of its value by September 2008) all kinds of alarm bells started to sound. If losses surpassed 10%, it would mean that all the buyers in 2007 would move into negative equity. Cranking interest rates down to 0% in October of 2008 along with the expansion of government backed securities allowed mortgage rates to reach an all time low. The resulted in a house boom in the middle of the worst Canadian recession since the Great Depression.

The Canadian government has moved 'all-in' on their gamble that the economy can be resuscitated.

CMHC indicates in its plan that it will insure $813 billion via a combination of mortgage insurance and mortgage-backed securities (MBS) by the end of 2009.

Looking at 2008 and 2007, one can clearly see that CMHC has drastically exceeded their planned figures. $812 billion is more than likely a minimum target. At this rate the Government of Canada will be insuring well over $500 billion in securitized mortgages and lines of credit by the end of 2010. It will also have issued over $600 billion in outstanding mortgage insurance. 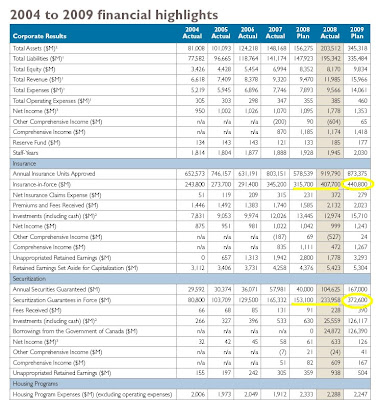 And unlike the United States, if this house of cards collapses, it won't be Bear Sterns and AIG that goes under... it will be CMHC. And who guarantees CMHC?

The Canadian government does.

A $50 billion dollar deficit is peanuts compared to the risk we are exposed to. And if the economy worsens with another slide in real estate values... our nation could be exposed to a collapse in confidence that will parallel the stock market in 2008 when Bear Sterns was about to fail.

Can you say Canadian peso?

Posted by Whisperer at 9:38 PM

Email ThisBlogThis!Share to TwitterShare to FacebookShare to Pinterest
Labels: CMHC