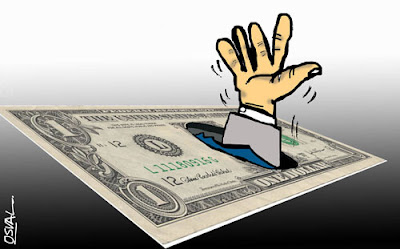 Well, it's Bank Failure Friday again. We follow the US banking system with keen interest because, as our Prime Minister said not too long ago, "there won't be an economic recovery until the U.S. financial system is repaired."

With that in mind, Bloomberg put out this story that "Toxic Loans Topping 5% May Push 150 Banks to Point of No Return".

Apparently more than 150 publicly traded U.S. lenders own nonperforming loans that equal 5% or more of their holdings, a level that former regulators say can wipe out a bank’s equity and threaten its survival.

Missed payments by consumers, builders and small businesses have pushed 72 banks into failure so far this year, the most since 1992.

More collapses may lie ahead as the recession causes increased defaults and swells the confidential U.S. list of “problem banks,” which stood at 305 in the first quarter.

Excluding the stress-test list, banks with nonperformers above 5% had combined deposits of $193 billion, according to the Bloomberg data. That’s almost 15 times the size of the FDIC’s deposit insurance fund.

The next six months could make this a very significant bank failure year.

Please read disclaimer at bottom of blog.
Posted by Whisperer at 12:41 PM