Foreclosure in Washington and Sprott on Silver 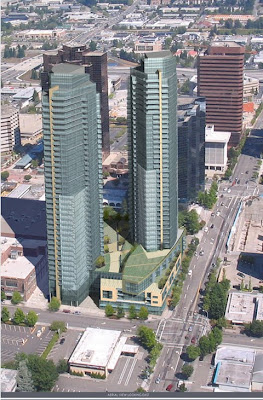 Interesting article in the Seattle Times.

Seems the largest condo development ever undertaken in the American Pacific Northwest, basically a two hour drive from Vancouver, has been foreclosed on.

The new owners announced price cuts to help spur sales at the 539-unit development, where just 118 sales have closed since the two towers were completed nearly two years ago.

The development is two towers of 43 and 42 stories. Gerding Edlen built them in large part with $275 million borrowed in January 2007 from a consortium of lenders led by Morgan Stanley.

"This is an acknowledgment that prices today aren't what they were," Ira Glasser, an adviser to Morgan Stanley, said Monday.

When Bellevue Towers opened in February 2009, condo prices ranged from $399,000 to $4.4 million. A Gerding Edlen principal predicted the project, at Northeast Fourth Street and 106th Avenue Northeast, would sell out in two years.

Five months later, with less than 10% of the units sold, Gerding Edlen cut prices an average 20%. With the additional reductions announced last week, average prices are 30$ lower than two years ago, Glasser said.

Silver trading continues to be incredibly strong despite the raids from the last two days. From the source who follows the Comex:

But the big silver story of the day comes from Sprott Asset Management.

Sprott runs a silver fund that is completely backed by Silver assets. And Eric Sprott is having trouble getting silver. Yesterday his chief lieutenant John Embry was on Eric King and predicted, based on the difficulty in acquiring physical silver, that he see's the price of silver rising above $50 in 2011 (he sees Gold going to $2000 for the same reason).