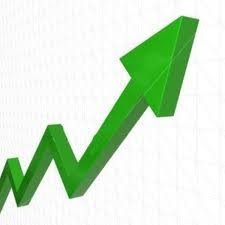 As faithful readers know, I have written a number of times about inflation.

Back on October 7, 2010 I wrote that while we would have deflation in some areas, we were going to suffer a concurrent bout of inflation too - producing a paradox that many have difficulty reconciling.

The vicious cycle created by the Federal Reserve’s Quantitative Easing monetary policy is kicking in.

We are seeing a huge influx of speculative money flows into the commodity sector pushing up food prices across the board.

At some point, sooner rather than later, the rising cost at the wholesale level as indicated by the CCI and the futures boards will translate into higher retail prices for consumers, who are already being pinched by stagnant wages and falling net worth.

Look at this chart which shows gains over the past year (click on image to enlarge): 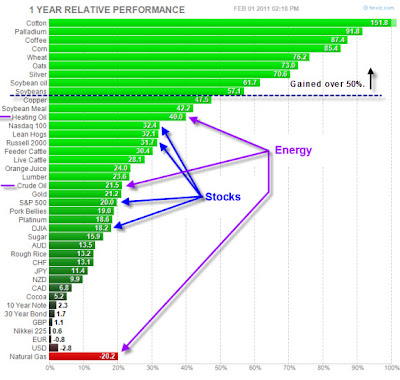 Look at that chart. In the past year everything, from metals to stocks to bonds to grains to energy, has experienced profound price increases.

Despite this, we are being told - on a daily basis - that inflation is too low.

This is, of course, because the way we calculate inflation has changed.

If you are a boomer in Canada, you remember gasoline priced in gallons. It was the 'unit of measure' we grew up with.

The recalculation of the Consumer Price Index is almost like saying in 1979 gas was $1.00 (per gallon) and today gas is only $1.21 (per litre). Therefore gasoline, as per it's 'unit of measure', hasn't really risen in price.

Calculate the inflation the way it was measured prior to the year 2000 and inflation is running at over 8%.

We simply changed the way we measure the price, and somehow rationalize the 'unit of measure' is the same.

Bottom line... inflation is trending now exactly like it was in the mid 1970s.

Inflation is raging across the globe.

The unrest and riots we are seeing are symptoms of that inflation.

History tells us inflation is best tamed early, but the US Federal Reserve is already late and demonstrating a remarkable callousness by doing the exact opposite of fighting inflation.

By the time action is taken to fight it, Inflation will have the momentum and it will take a vast overreaction on the part of the Federal Reserve to restrain it.

They'll have to drain enormous amounts of liquidity and tolerate vastly higher interest rates to be able to do that.

And you know that the Fed will hesitate, equivocate, and ultimately be late with their actions.

People are finally starting to notice, as this CNBC story notes.

Unfortunately the fact is all this commodity inflation hasn't really begun to work it's way to consumers here in North America yet. It has started, to be sure, but what we have seen is nothing compared to what is coming.

It's called currency induced cost-push inflation, inflation is caused by producers and merchants being forced to pass along through higher prices the rising cost of inputs to their products.

Your income isn't rising to keep pace with rising expenses and you get squeezed. Hard. And its not luxury items that are going up in price, its the staples. Bread, milk, gasoline, clothes, eggs, meat... the basics that no one can realistically live without.

Combine the squeeze on basics with rising interest rates and new mortgage rules... and life for mortgage holders in the Village on the Edge of the Rainforest is going to get very, very difficult.

Once this process kicks into high gear, and the serious price inflation comes, I think we will all look back and be shocked that people were worried about deflation in 2008-2010.

Please read disclaimer at bottom of blog.
Posted by Whisperer at 2:23 PM