The Battle for the Message Begins 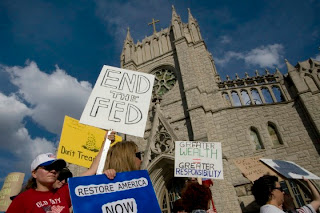 I suspect over the next few weeks we will see a theme appear in some of the media coverage of the Occupy Wall Street protests as they spread across North America.
And the theme will focus on the one like in this story, How silly are the End the Fed signs at Occupy Kansas City?
Adbusters, the Vancouver-based anti-consumerist magazine, called on people in July’s 97th issue to flood into Lower Manhattan on September 17 to “occupy Wall Street for a few months.”
Obstentially the movement is to protest against corporate greed. But 'End the Fed' is an important component of real solutions for 'Occupy Wall Street'.

And I would suggest that a titanic battle is now underway to try and extinquish the 'End the Fed' component.
Articles in support of the movement are starting to pop up as well, like this one: Ron Paul and Occupy Wall Street should jointly call for full public disclosure of all Fed bailout money.
US Republican Presidential candidate Ron Paul Supports the ‘Occupy Wall Street’ Movement and there are a great many who do not want the two messages linked.
Understanding the role of central banks is our current economic situation is crucial.
And driving a wedge between the protestors and this concept is going to be a major theme in the coming weeks.

As Ralph Nader said on CNN...“The Federal Reserve is now a government within a government. It is totally out of control. Congress doesn't control it. It's funded by the banks and we either have constitutional government or we don't."
The power elite DO NOT WANT the 'Occupy Wall Street' movement to get anywhere near embracing this message because it is within this message that real reform and real solutions lie.

Please read disclaimer at bottom of blog.
Posted by Whisperer at 3:49 PM