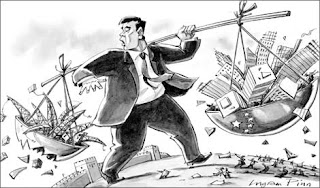 If China goes bust, will Vancouver go Ka-Boom? This is the $64,000 question.
Or, given that we're talking about Vancouver Real Estate, the $64,000,000 question.
HAM, or Hot Asian Money, has been one of the factors attributed to driving our irrational real estate market.  And many have openly wondered, if China falters will Vancouver whither?
We may soon find out.
Simon Black, who writes the blog Sovereign Man, recently reported that the stresses of the housing bubble in China are starting to become evident.
As faithful readers know, we have talked about the fact that China has poured more stimulus per capita into their economy than have the Americans.
And Black reports of the effects of Chinese backpedalling.
After dumping trillions of dollars into the economy to ward off the effects of the global financial crisis, Black notes the Chinese government is now pressuring banks to reduce loans. A move which is bringing much of China's credit-intensive economy to a screeching halt.
Recent reports from China's National Bureau of Statistics show that home prices have fallen up to 50% in many parts of the country in the period from July to September.
And the reality of those statistics are evident to Black who notes the reaction of Chinese citizens:
In Shanghai that uncomfortableness manifested itself in rage as nearly 300 angry customers stormed a sales office of Longfor Properties Co Ltd after finding out that the developer had slashed prices on one of its projects by nearly 25%... practically overnight.
Another angry mob in Shanghai assembled outside the sales office of China Overseas Property Group Co after that company made similar price concessions for new buyers. These were obviously the poor suckers who bought in months (or years) ago at a much higher price... and they're not especially happy about a property crash.
Black notes the troubles are not just in real estate. Auto dealers are having the same issues, with many luxury brands ranging from BMW to Mercedes offering steep discounts up to 20% to lure buyers onto the showroom floor.
Growth has definitely slowed dramatically, and the tightening of credit is having widespread effect across the economy.
This article notes that a Chinese banking collapse is brewing and that in Hong Kong September sales to the United States and Mainland China fell 8.9% and 7.3% respectively. Shipments of electronics are off 16%, while outflow of T-shirts, undies, and the like fell 8%.

Please read disclaimer at bottom of blog.
Posted by Whisperer at 6:04 PM