Bank of Montreal warns about the Boomer Trigger 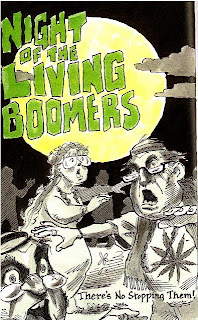 So a Richmond home has now sold for 33% below assessed value. It's the Boomer Trigger at work. We talked about it back in March 2012:

The majority of the self-indulgent Boomer generation have failed to prepare for their senior years.

Seven out of 10 Boomers do not have enough money set aside for retirement. And since 2011 marked the beginning of the great Boomer transition into retirement, this financial planning statistic is significant.

Starting in 1946, the demographic Post-World War II baby boom began. And the Boomers at the front of this wave have benefitted most from seemingly everything.

Now, as these Boomers head into retirement without adequate funding to carry them through their golden years, the vast majority have a very simple retirement plan: sell their bubble inflated asset of a house, downsize and live off the proceeds.

Thus the Boomer Trigger... trigger the sale of the one significant asset they have to fund their retirement. At the same time, if the market slows, Boomers can use their original purchase price advantage to under cut other sellers in a collapsing market - a maneuver which has the potential to crash the market if done by a large number of Boomers at the same time.

It remains one of the most viewed posts on this blog and it continues to generate a lot of email.

Most of the email is from indignant readers who either want 'proof' about the idea so many Boomers have failed to adequately plan ahead or they vent about how ridiculous the thesis is.

Well the haters now have a new target to which they can vent their frustrations: The Bank of Montreal.

As the Financial Post noted on Wednesday BMO announced: Boomers are warned using home sale to fund retirement could backfire.

About a third of Baby Boomers plan to sell their home to fund their retirement, according to a study that questions whether buyers will dry up as that massive segment of the population downsizes... 40% of respondents say they are not confident in their ability to save for retirement and 41% say they might just end up using their homes to shore up any shortfall in their golden years.

Bank of Montreal is warning Boomers not to count on that nest egg, while other observers suggest that even if prices don’t plunge, big increases in property values are a thing of the past.

“They shouldn’t be relying on their homes because there are risks,” says Marlena Pospiech, a retirement strategist at the BMO Retirement Institute.

The bank suggests the following risky scenario: As Canada’s population ages, more Boomers will be retiring and selling their homes, putting downward pressure on prices. [Boomers] could be in serious financial trouble if they are relying on their home, especially if they are highly leveraged.

Meanwhile the counter-arguments are heating up to assuage and dispelling concerns about this threat. And, as always, we are told it will be wealthy immigrants who are going to pour into the country and be our salvation:

Demographers say a collapse in prices based on Boomer homes flooding the market isn’t reality either.

“There is going to be continuing demand for housing as long as we bring in 250,000 immigrants a year,” says Doug Norris, chief demographer at Environics Analytics. Given the creation of about 175,000 households each year (based on the latest census data), that’s plenty of demand.

Interestingly there is another twist to the counter-arguments:

Demographer David Foot, author of Boom, Bust and Echo, believes there are enough children of Boomers to soak up the housing supply.

“The Boomers have been averaging about two kids per family [in the U.S.] and replacing themselves,” says Mr. Foot.

“It’s a bigger issue in Canada because the Boomers only had about 1.6 or 1.7 kids per family. The echo isn’t quite as big.”

He predicts the twenty somethings today that have been driving the condo market will at some point buy into single-family detached homes. “There are enough of them to buy the Boomers’ houses.”

His more pressing worry is for the condominium segment. “It is question of whether they will move out to the suburbs to raise their kids like every other generation has,” says Mr. Foot.

“My concern is who will buy all the condos when the twenty somethings vacate them.”

It's interesting to noteThe Financial Post offers these viewpoints in order to present a 'balanced' article and offset BMO's warning.

Now... why do you suppose the economists over at BMO didn't give these elements consideration before issuing their warning?

Do you think it's because Boomer kids can't afford their parent's houses at their current valuations?

There may be lots of Boomer kids who would be willing to purchase those homes, but where are they going to get the money to buy them?

Without a dramatic, surging economy or negative interest rates combined with 50-60 year amortizations... it ain't going to happen.

And without that same surging worldwide economy, HAM simply isn't going to provide the immigrant incomes to save the Boomers.

That's why BMO is warning all and sundry that "as Canada’s population ages, more Boomers will be retiring and selling their homes, putting downward pressure on prices."

Even the banks can see what is coming.


Please read disclaimer at bottom of blog.
Posted by Whisperer at 8:00 AM