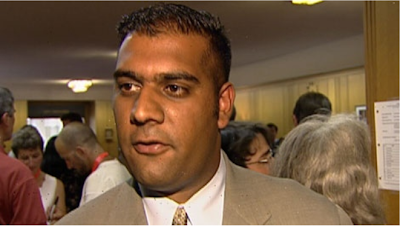 In May 2012 we heard how realtor Sam Sharma's real estate licence was suspended indefinitely by the Real Estate Council of B.C. (RECBC) just days after his manager at Multiple Realty Ltd. told the council that money belonging to Sharma's clients may be missing in what appeared to be a misappropriation of funds by Sharma.

At the time, Sharma told CTV news that he was extremely remorseful and couldn't explain why he had such serious issues with money.

"I've been paying back creditors for the last two or three years, trying to please people, trying to make things right from my past, trying to put on a show of success. You're either really, really stupid to do this a second time, or I've got a very serious psychological problem with money."

By 'doing this a second time,' Sharma was referring to a 2005 incident where the RECBC cancelled his licence for five years as a result of a number of infractions, including misappropriating buyers' deposits and forging clients' signatures.

Sharma pleaded guilty in court to that 2005 offence and was ordered to pay back $45,000 in money that was supposed to be in trust.

Incredibly, after his five year suspension, Sharma was back in hot water with another misappropriation allegation.

In reviewing the 2012 offence over the past 13 months, the RECBC has finally come out and ruled that Sharma's licence is to be permanently cancelled.

In a press release issued Friday the RECBC said:

Smrat (Sam) Sharma was subject to an Order of a discipline committee that his licence be permanently cancelled. The cancellation of Mr. Sharma’s licensing under the Real Estate Services Act was effective as of June 6, 2013, although his licence was surrendered to the Real Estate Council on May 7, 2012.

Can we therefore conclude he was really, really stupid AND has a very serious psychological problem with money?


Please read disclaimer at bottom of blog.
Posted by Whisperer at 1:42 PM