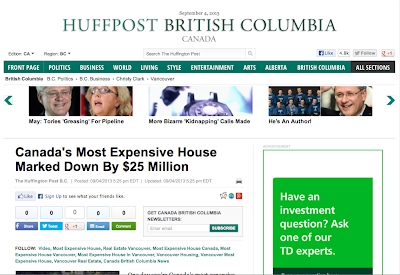 On Tuesday we told you  how West Van's infamous 'fake mansion', once Canada's most expensive listing at $38 million, had been marked down by $25 million.

We wondered if the Vancouver Sun or Province newspaper would pick up on the story with the same gusto shown back in February when they helped the fake pictures go viral around the world, but to date there's been no response (thus reinforcing their inevitable slide into irrelevance).

But that doesn't mean the mainstream press is ignoring the story.

The Huffington Post has picked up the ball and run with it: Canada's Most Expensive House Marked Down by $25 Million (hat tip: Many Franks):

One day you're Canada's most expensive house, the next you're just a teardown on a ritzy piece of land.

A seaside property located at 3810 Marine Drive in West Vancouver, which was the country's priciest listing last February, has been marked down from $38 million to $12,888,000. That's a hefty drop of $25 million and change.

Current listing agent Lionel Lorence, couldn't say why the original asking price was so high, but acknowledged there was little reality behind the colossal tag.

"The real estate values on the West Vancouver waterfront are rich prices, but this one when it came out, at $37.9 million, seemed to be exorbitant," he told The Huffington Post B.C.

The house itself is a teardown, but the value is in the land, The North Shore Outlook reported in February.

The rancher bungalow built by a shipping magnate in 1964 sits on a 34,000-square-foot lot with unobstructed views of the waterfront, with enough space to subdivide the property into three estates.

That's how West Vancouver realtors Laura McLaren and George Tsavdaris came up with the price at the time, figuring that any of three lots could be worth $10 million, while the house itself could go for $7.9 million, they told the newspaper.

The agents may have been a tad hopeful in pitching the prospect of a subdivision, said UBC real estate expert Tsur Somerville.

"It seems very, very optimistic on what they'd be able to get from the city in terms of a rezoning or a subdivision," he said.

Canada's most expensive home today is anything but a teardown. For $35 million, you can have a nine-bedroom Shaughnessy mansion with stained-glass windows, an art deco parkade and an oak-panelled elevator.

Tsur Somerville paints the realtor's responsible for that debacle - Laura McLaren and George Tsavdaris - as a 'tad optimistic.'

Personally we say Tsur is being a 'tad' polite.


Please read disclaimer at bottom of blog.
Posted by Whisperer at 4:29 PM