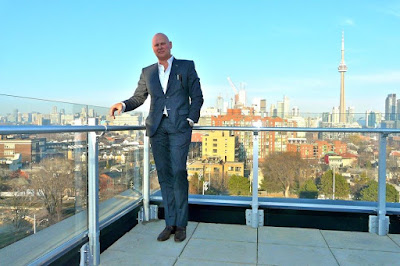 Meet Brad Lamb. Faithful readers will recognize Lamb as Toronto's version of the Rainforest's Bob Rennie - aka 'the Condo King' of their respective cities.

If you haven't been keeping up, the centre of the universe has been awash in Lotusland Asian money overflow since the imposition of Krusty's 15% foreign buyers tax last September. Panic buying has gripped Toronto and suddenly there are calls from all corners for the Big Smoke to take BC style action and implement their own foreign buyers tax.

Of course all of this is curious since, just like Vancouver pre-tax, the local real estate industry has been adamant that Toronto house prices are not fuelled by foreign funds. In fact as recently as Jan 31, 2017 the Toronto Star newspaper noted the following denial by the Toronto Real Estate Board:

Don’t blame overseas investors for the high price of housing in the Toronto area, says the city’s real estate board.

Now you would think that if only 4.9% of the market is impacted by foreign money, any discussion of a foreign buyers tax would be inconsequential to the industry.

But as political momentum gathers to implement just such a tax, the Condo King of Toronto comes out with a claim that utterly shreds the 4.9% narrative.

In an email sent to unit owners in his 17 buildings late Tuesday, Brad Lamb railed against the long-debated idea of a 15 per cent surcharge on buyers of Toronto properties who are not Canadian citizens or permanent residents; similar to the one imposed in Vancouver in August 2016. Boasting of having “eaten, drank, and slept the Toronto real estate marketplace for 30 years,” the CEO of Lamb Developments argues such a tax would be “an egregious error in policy.”

“In Toronto… it could also precipitate a Canada-wide recession,” Lamb wrote near the start of his roughly 1,300-word note.

The Toronto Real Estate Industry now joins their Vancouver counter parts in trying to move heaven and earth to politically intervene in public policy dealing with the massive malinvestment created by the worldwide excess credit epidemic.

In the process we get another glimpse at how the Real Estate Board's claims about the impact of foreign money is completely detached from what their members on the ground know all too well.


Please read disclaimer at bottom of blog.
Posted by Whisperer at 11:07 AM