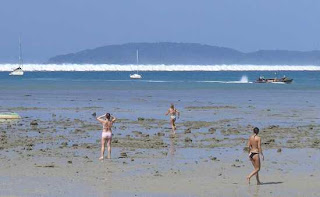 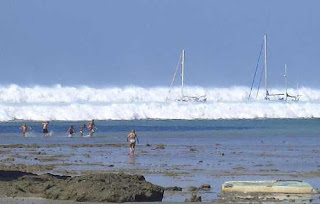 Yesterday the DOW plunged another 250 points to close at its lowest level in 12 years. It hasn’t been this low since May 8th, 1997.

Twelve years of financial gains have now been wiped out.

President Obama’s Advisory Board Chief is at a loss for a solution. "I don't remember any time, maybe even in the Great Depression, when things went down quite so fast, quite so uniformly around the world… you know, even the experts don't quite know what is going on."

That's a scary admission. It means the men responsible for finding solutions to our economic crisis admit they don’t know what is going on.

And now panic begins to truly grip the financial markets.

What does it all mean for Real Estate in the Village on the Edge of the Rainforest?

I am reminded of Boxing Day, 2004. Amid festive celebrations came reports of a massive tidal wave in the Indian Ocean.

Conditioned by Hollywood depictions of disaster, most people expected the initial images to show massive 150 foot curling waves of water descending on communities in a 'Poseidon Adventure' style of calamity.

The reality, while terrifying in its scope of destruction, was nowhere near that visually satisfying. As images of the disaster filtered out to the world, most of us were surprised to see that the ‘tidal wave’ was actually a massive ‘surge’ of water, as when a door is opened on a giant pen of water.

More intriguingly, reports from many of the victims revealed that the first sign of the horror to come was not a visible wall of water speeding towards the beach. Instead, it was quite the opposite.

Personal accounts of the tidal wave that killed more than 20,000 people in eight South Asian countries described how the sea suddenly disappeared a few minutes before the wave hit: submerged rocks became visible, fish flapped harmlessly on the sand and beaches suddenly stretched towards the horizon.

And since the last major tsunami in the region was more than 60 years before, few understood the significance of the drying-up of the sea.

"The water went back, back, back, so far away, and everyone wondered what it was - a full moon or what?" said Katri Seppanen, a tourist on Phuket Island's Patong Beach in Thailand. "Then we saw the water come, and we ran."

The disappearing beach phenomenon is simple enough to explain. A tsunami wave can travel thousands of miles across an ocean without losing power (one in 1960 crossed the Pacific after an earthquake in Chile and killed 200 people in Japan, more than 10,000 miles away).

But when it hits shallow water off a coast it slows right down and builds in height, creating a vacuum that sucks the water off the very beaches it is heading towards.

For the locals and tourists alike on that fateful Boxing Day in Thailand, they were drawn to the instant tidal flats like moths to a flame. One stunning pair of photos shows tourists walking out into the vast expanse of suddenly dry beach to explore; oblivious to the impending danger.

To me that photo stands as a perfect analogy of the Vancouver Real Estate market.

It has been almost 80 years since 1929 and the significance of the collapsing economy is as lost on most Vancouverites as surely as the drying-up of the sea was lost on those tourists in Thailand in 2004.

The wiping out of markets, the collapsing of the economy, our political and economic leaders perplexed at what is going on around us; all while we in Vancouver frolic on the economic beach of daily life, blissfully unaware of what is bearing down on us.

Realtors and home owners wait, hopeful for a spring bounce. There won’t be one.

There won’t be any American buyers coming to rescue our market. No Asian buyers or European buyers riding in to keep our land values afloat on the coattails of Olympic hype.

In short, there will be no saviors for our Real Estate market.

We are like those tourists on Thailand’s Patong Beach. We are standing around, wondering what it is that is happening.

“Where have all the buyer’s have gone? Is it a full moon, or what?”

In a few months we will realize what is happening.

Then we will see the water come.

Email: village_whisperer@live.ca
Posted by Whisperer at 2:26 AM