"This Isn't Any Ordinary Crisis" - Volcker. "Even the Experts Don't Know What is Going On!" 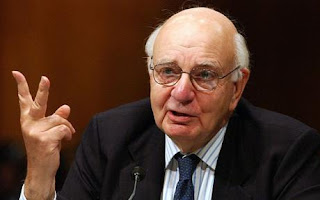 Paul Volcker is an American economist and was the Chairman of the Federal Reserve under United States Presidents Jimmy Carter and Ronald Reagan (from August 1979 to August 1987).

He is currently chairman of the newly formed Economic Recovery Advisory Board under President Barack Obama.

On Friday he said that the global economy may be deteriorating even faster than it did during the Great Depression and made the frank admission that, "you know, even the experts don't quite know what is going on".

Volcker noted that industrial production around the world was declining even more rapidly than in the United States, which is itself under severe strain.

"I don't remember any time, maybe even in the Great Depression, when things went down quite so fast, quite so uniformly around the world," Volcker told a luncheon of economists and investors at Columbia University.

Volcker, a former chairman of the Federal Reserve famed for breaking the back of inflation in the early 1980s, mocked the argument that "financial innovation" , a code word for risky securities, brought any great benefits to society. For most people, he said, the advent of the ATM machine was more crucial than any asset-backed bond.

"There is little correlation between sophistication of a banking system and productivity growth," he said.

The current crisis had its beginning in global imbalances like a lack of savings in the United States, but policy-makers around the world were too reticent to take action until it was too late, Volcker said.

Now that the crisis had erupted, it was important to take decisive actions, including a more effective regulatory structure and some movement toward uniform accounting systems, Volcker said.

He said all financial institutions that are deemed too large to fail should be subject to increased scrutiny, echoing the findings of the Group of 30, a panel of policy-makers and influential economists, which he leads.

Send your comments via email to village_whisperer@live.ca
Posted by Whisperer at 1:47 PM