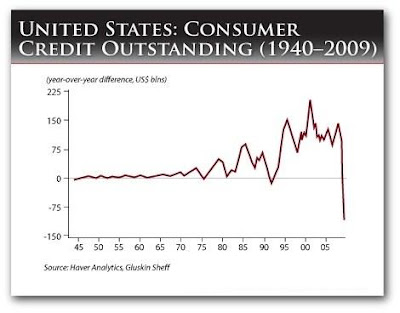 And for an economy that is 70% dependent on consumer spending, that's a huge problem.

Americans have been the world's champion consumers. Just lend them money and they will spend it. A least that's the way the world economy is supposed to function.

But when Americans stop spending it brings a hush to the entire planet.

The malls go quiet... trucks slow down... ships are idled... and finally factories are shut down. Clerks, drivers, stevedores and assembly line workers all go home.

From the Times, "For the first eight months of the year, the United States trade deficit with China is down by about 14% or $20 billion, compared with one year ago. The nation's trade deficit with Japan has shrunk by almost 20%, and its deficits with Mexico, Canada and the European Union are down more than 40%."

Any wonder the BC government is looking at a massive deficit?

"The huge shift stems mainly from the staggering collapse in trade. With credit markets frozen and Americans facing the highest unemployment in more than 30 years, the United States suddenly stopped shopping overseas at anywhere near the volumes that had become normal."

This despite the fact the US federal government is going into massive amounts of debts trying to get consumers to spend again.

They've given their citizens tax rebates, incentives, loans, and bribes. They've run a federal deficit three times higher than the previous record. And they have put at risk a sum of money equal almost to the entire US GDP.

Still those hardheaded consumers won't consume like they're supposed to.

Suddenly, it's the 'Age of Thrift.'

And if the consumer credit party is over, what will replace it?

Is it possible for North American businesses to grow and prosper under these conditions?

North America has great businesses with great brands. And as the dollar falls, the solution is to gain global market share in some sectors.

And in the contradition lies the ultimate solution.

Americans will have to cut back on their spending and it will be time for the rest of the world to do some of the buying for a while.

And since the United States has less than 5% of the world's population, it is the logical next step.

But rebalancing the world's economies won't happen overnight. Nor even in a couple years. It will take a long, long time.

In the process, North America has a very painful readjustment ahead of it. A readjusment that will affect all sectors of our society.

And real estate values are going to be very much a part of that 'painful' readjustment, even here in North America's most bubbly real estate city.

Please read disclaimer at bottom of blog.
Posted by Whisperer at 12:02 AM

Email ThisBlogThis!Share to TwitterShare to FacebookShare to Pinterest
Labels: BC Economy, BC Real Estate, Canadian Economy, US Economy