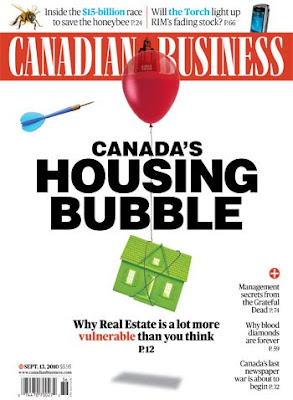 As if to follow up on yesterdays post, Canadian Business Magazine hit the newsstands today hilighting the Canadian Housing Bubble.

And it's an excellent read.

The magazine hits all the key points we've been talking about for the last year and a half.

They zero in on the central causes of the massive rise in home values the last 10 years: the Canadian Mortgage Housing Corporation (CMHC).

Canadian Business Magazine (CBM) cuts right to the chase and points out how the federal government stoked the housing market for an extended period and that "Canadians should brace themselves accordingly for a more jarring correction in residential real estate."

CBM attempts to outline how CMHC played its "critical, if underappreciated, role."

Lowering standards for acceptance, insuring mortgages with no downpayment and increasing amortization periods from 25 to 40 years for that insurance had a profound effect on housing prices.

And like the naive car buyer who is lured into buying a new car based, not on what they can afford, but upon whether or not they can make the monthly payments... so too have millions of Canadians been hooked into buying houses based on a mortgages monthly carrying cost.

And in the process they set off a decade long bidding war for real estate.

It was a purposeful strategy by the federal government.

Between September 2008 and April 2009 the nation was spiralling down into the recession that was gripping the world. In an attempt to cushion Canadians from the recession, CBM notes that:

Next Ottawa authorized CMHC to buy up to $125 billion in mortgages from banks and other financial institutions under the Insured Mortgage Purchase Program (IMPP). We talked about this move here, and it lays waste to the myth that Canada never bailed out it's banks.

They did, big time.

These actions allowed credit to flow and gave the housing boom it's fuel to ignite a massive R/E bonfire. In Vancouver home prices have more than doubled since 2000.

CBM notes that the unwinding of the powerful housing-market stimulus is already underway.

The magazine attempts to temper how bad the reckoning will be. They say that when Canada's correction arrives, it'll likely prove less traumatic than America's.

Canada's lenders generally have legal recourse to borrowers, meaning they can pursue a borrower's other assets in court in the event of foreclosure. That makes it more difficult to simply abandon a home that has become a financial albatross.

Many argue that this will keep Canadians from defaulting on their mortgages.

I suspect that as values start to drop, the number of people who bought the maximum amount of house they could at emergency level rates will find that they are seriously underwater when mortgages come up for renewal.

Even if interest rates never rise, this will be problematic.

But bump interest rates up just a few percent, and I forsee enough Canadians being forced into foreclosure that it will cause a devastating domino effect - especially here in Vancouver.

I seem to be in the minority on this issue, even amongst R/E bears.

And I seriously fear what this could do to our country. As we noted yesterday, CMBC is on the hook for $770 Billion dollars in mortgages and only has $9 Billion in assets - a condition which CBC noted was "more leverage than any U.S. bank or lending institution ever had."

If CMBC has to pay out even only 10% of that $770 Billion, it would require a taxpayer bailout of $60 Billion.

It took our nation over 10 years, and the introduction of the GST to get rid of a then-record $40 Billion deficit a decade ago.

If the dominos fall as I worry they will... Canada will be in serious trouble.

Please read disclaimer at bottom of blog.
Posted by Whisperer at 4:34 PM