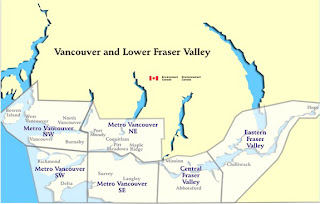 Back on May 7th, reference was made to the April Real Estate numbers in our fair Province of British Columbia.
In that post we noted that while Vancouver proper ramps up in it's combustible intense heat, the periphery continues to languish. We observed that the Fraser Valley had stalled and any comment that sales were flat would be generous in the extreme.
Reinforcing this is an article in the local Fraser Valley newspaper, the Langley Advance.
After property sales in the two communities dropped substantially in April, the Advance is reporting that Realtors in the Fraser Valley are warning people in Abbotsford and Mission not to panic.
And why would they 'panic'?
Sales of detached houses in Abbotsford fell last month by 33% compared to sales in April 2010.
In Mission the plunged down 42% from April of 2010 and crated 48% when compared to March of 2011.
But that's nothing compared to townhouse and apartment sales.
In Abbotsford they are down 43.5% and 7.1%  respectively from where they were a year ago.
And in Mission they have utterly collapsed by 77.8% and 71.4% each compared to April 2010.
The collapse in sales hasn't started to affect prices yet, however, as they have soared 11.5% since last year.
But it's only a matter of time.
==================