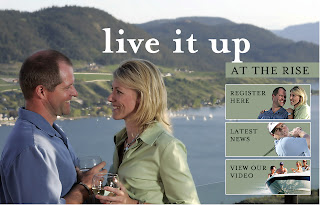 The North Okanagan region of our home province of British Columbia is situated in the B.C interior, between the Okanagan Valley and the Shuswap.  The region stretches from the City of Vernon in the south to community of Grindrod in the north.
With a moderate climate producing warm spring weather, hot and sunny summers, mild autumns and temperate winters, the North Okanagan boasts a limitless variety of year-round recreational activities and is considered a vacation playground for both those in the Village on the Edge of the Rainforest... and for oil-rich investors from our next door neighbour province of Alberta.
In fact, one of the most popular ski resorts in BC is the Silver Star Mountain Resort located just north of Vernon.
And Vernon itself is surrounded by 3 beautiful lakes; Kalamalka Lake, Okanagan Lake and Swan Lake.  Many say that the beauty of the surrounding countryside and the excellent recreational facilities such as Silver Star ski resort, have made Vernon a major year-round vacation spot
But as we have covered in other posts, the periphery of Vancouver is suffering mightily from a dramatic real estate downturn.
And the Northern Okanagan region is being hit particularly hard.

Real Estate statistics are out for the month of April and sales are down 70% from the boom years. Even during the slowdown in 2008/2009, total unit sales were much higher than this past month:
The Northern Okanagan is considered a vacation playground and as the local R/E advertisement photo posted above states, you buy here to 'live it up'.
The problem is... when a financial crunch begins in earnest, the first luxuries to be sacrificed are the vacation homes.
The Northern Okanagan, along with the entire periphery of Vancouver, is clearly being sacrificed by both buyers in BC and in Alberta.

Is this a simple downturn?

Please read disclaimer at bottom of blog.
Posted by Whisperer at 1:31 PM