Anyone got a pin? - Updated 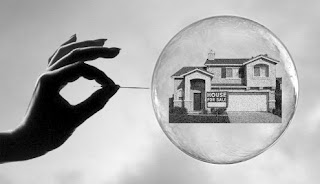 For three years now there have been articles all over the Canadian blogosphere warning that the debt levels of Canadians has been getting too high, that real estate valuations are out of whack and that, much like the rest of the world, the real estate bubble in our country will burst.
Over the past year, many of those same warnings have started to appear in the mainstream media, lead by the consternation's of our central banker and federal Minister of Finance.
But while the mainstream media has been content to simply warn of the consequences of too much debt and over valued real estate, recently articles have started to suggest the bubble is getting ready to pop.
Yesterday CBC carried one such article.
Headlined "Canada's Housing Bubble deemed close to bursting", the Mothercorp detailed ruminations of economists from Capital Economics, an economic think tank founded in 1999 to provide "independent macro economic research in the US, Canada, Europe, Asia, Latin America, the Middle East and the UK, on the property sector."
Glancing their ivory tower eye towards Canada, they conclude that the Land of the Maple Leaf's housing market is in a bubble that's set to burst.  And they say housing prices could plunge by as much as 25%.
“Housing valuations have lost all touch with fundamentals and household debt is at a record high.”
And that's for the nation as a whole, imagine if the study were centered on Vancouver?  Particularly in light of the new 'facts' from the Real Estate industry which conclude that HAM is not a significant factor in our inflating land values?
Capital Economics says that Canadian house prices are overvalued at "close to the excessive levels seen in the frothy U.S. market at its 2006 peak."
None of it is news to the blogosphere.
The linchpin, in our opinion, is that significant drops will be driven by rising interest rates.  As we have said ad nausem, there may be a slow melt in the short term but the big crash will not occur until interest rates start to rise.
And Capital Economics's expects that the Bank of Canada will stay the course in the near term on interest rates as financial worries at home and abroad keep Mark Carney from taking action to raise rates.

So is a correction still a long ways down the road?
Interestingly Realtor Larry Yatkowsky has posted data (also hilighted over on VREAA) that shows R/E sales on the 'HAM-infused' westside of Vancouver are down by over 60% this past month.
As VREAA asks, "Is this the start of the seasonal summer slowdown, or the beginning of buyer drought? Who will be stepping up to take the über-jumbo-mortgages necessary to ‘buy’ these properties when prices start falling?"
Pin anyone?
==================

Please read disclaimer at bottom of blog.
Posted by Whisperer at 10:55 AM