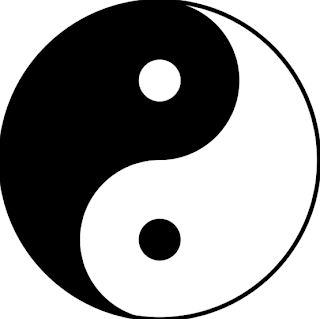 So it's a few days into a new month, and the yin and yang of real estate pumping is in full swing.

The yin and yang is an ancient concept referring to complementary opposites, such as light/dark or day/night.  But it also reflects the way the industry reports and spins the monthly real estate news.

In Vancouver the industry gushes that Vancouver area home sales are up nearly 12% from last year.

But what that headline doesn't tell you is that last month’s sales were also 22.2% below the 10-year sales average for the month and that those same June sales actually plunged 17% from the abysmal sales recorded in May.

Talk about spinning the news.  The reality is June 2013 was the worst June in our market since 2008. And, as Larry Yatkowsky notes, most median price categories were down last month.

But it gets worse.

Take a close look at the stat's package from the Real Estate Board of Greater Vancouver and you discover that the benchmark price of a single-detached house on Vancouver’s West Side is $2,070,200, a 6.1% decrease from a year ago.

But nothing compares to Whistler where we learn that the benchmark price of a Whistler condo has fallen 41.2% from five years ago and now sits at $222,800.

There's the real headline in all of this.

Analysts at Scotiabank are taking a close look at these stats from Vancouver and similar ones from Toronto and they aren't buying into all the headline hype either:

“Like Vancouver, last June was when the bottom fell out of the market via a 13.2% m/m seasonally unadjusted drop compared to May 2012 that made it among the weakest months of June over recent years. Thus, the sharp shift lower in year-ago base effects is now containing the year-over-year changes but still leaving behind trend weakness in the resale volumes and a much cooler market than prior to the Spring of 2012. Now with Q2 data, we are transitioning toward comparing against the much weaker volumes that began to emerge last Spring. I therefore don’t buy the hype that the correction is bottoming or reversing just because the year-ago pace of decline is ebbing.”

The pumpers shriek the market is turning around and we're in the early days of a recovery. Hopefully they won't let the Yang kick them in the ass.