Ferris... the miles aren't coming off! 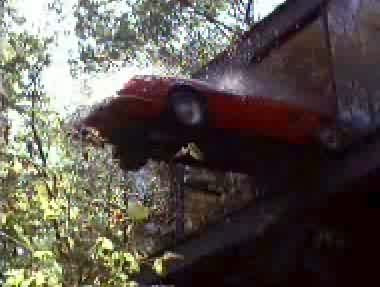 Last week I started to talk about how I believe the stage is being set for a Canadian real estate collapse of historic and massive proportions.

Since the collapse of the dot-com bubble in the late 1990s, western governments have manipulated economic conditions so that we moved quickly from the unwinding of one bubble and into another.

We believed this because we looked at our asset prices (real estate and stocks) and we saw the prices going up and we said “hey, were actually getting wealthier”.

But we weren’t getting richer because we were spending money at the same time instead of saving money. We would borrow on the asset value and spend it consuming. And as we spent money, the government counted that money as GDP.

And as long as our GDP was rising then we thought our economy was growing.

But the whole time our GDP was going up, we weren’t measuring how much our wealth was going up. We thought we were okay because some appraiser said that our house was worth more. Or the stock market was still going up.

The 2008 Financial Crisis was simply the inevitable collapse of this ponzi mindset.

But when that collapse happened, it was SO intense…. SO profound... that our political masters panicked.

What happened in September and October 2008 had previously been considered completely impossible and totally unthinkable. We have always been told that the lessons of 1929 and the Great Depression had resulted in changes to the financial system so that NEVER AGAIN could the financial system come close to totally collapsing.

Yet we were within two hours of a complete collapse of our banking system and of our economy... and governments responded with panic measures.

They responded the same way they did each time there was a ‘financial emergency’ over the past several decades... with stimulus money and bailouts. Only this time they did it on a scale that has never been seen in the history of the world.

We had the internet bubble because the US Federal Reserve was too easy with money.

Easy money allowed people to invest in companies that were tremendously overvalued. None of the dot.com stocks were paying dividends because none of the companies had a realistic chance of making money. But it didn’t matter. The frenzy was pushing stock prices up so people grabbed all the money they could and kept investing in them.

Recognizing what was going on, Federal Reserve Chairman Alan Greenspan sought to intervene. In 1996 he talked about irrational exuberance and they took him to the woodshed for saying something negative. But he still went ahead and raised interest rates to correct the imbalance.

And the bubble burst.

We were destined for a long, painful recession. Those malinvestments were going to have to be worked off. Capital would have to be reallocated to where it could be productively used, and labour would have to be laid off and rehired as that capital found productive uses.

As painful as it might be, it would be a necessary recesiion; the free market's way of correcting the imbalances.

But government intervened in the free market.

Rather than permit the painful process to play out, government would ‘stimulate’ the economy... again.

As always, the stimulus money created a catastrophe. This time in real estate.

Everyone bought into the idea that it was going to go up... year after year... just because.

And for the last nine years it has, fueled by easy money which is being invested in something that does not make fiscal sense – other than the value of the ‘asset’ seems to be rising by 10 – 30% each year.

The real estate bubble, and the financial services industry it created, has grown stupendously out of proportion.

A long, painful recession is needed to correct the imbalances.

But by responding in the same egregious manner to the 2008 Financial crisis, another catastrophe is inevitable.

Not only have we failed to correct the imbalances, western governments have liquefyed the system beyond any rational explanation in response to fears the entire system could collapse.

In the United States, the U.S. money supply has been expanding at an absolutely unprecedented rate (more than doubling the monetary base since the collapse of Lehman Brothers).

Fears of inflation – even hyperinflation – have been propagated throughout the blogosphere.

So why are we not experiencing rampant inflation?

Why is the U.S. dollar not falling through the floor?

Well, the truth is that all of this new money has gotten into the U.S. financial system but it is not getting into the hands of U.S. businesses and consumers. In fact, even though the money supply is exploding, U.S. banks have dramatically decreased lending. This has brought us to a very bizarre financial situation.

What we have seen is the U.S. government shovel massive amounts of cash into the U.S. financial system and then watch as the big banks sit on that cash and refuse to lend it. The biggest banks in the U.S. reduced their collective small business lending balance by another 1 billion dollars in November 2009.

That drop was the seventh monthly decline in a row. In fact, in 2009 as a whole U.S. banks posted their sharpest decline in lending since 1942.

So all of this money that the U.S. government pumped into the financial system has been doing American businesses and consumers very little good. That is why we can have a vastly increased money supply and very little inflation.

So if the banks are not lending the money to the American people, what are they doing with it?

So instead of loaning money to American businesses and consumers who desperately need it, a ton of this new money is being used to pump up yet another bubble. This time the bubble is in U.S. Treasuries. Asia Times recently described how this trillion-dollar carry trade in U.S. government securities works...

Anyone who has dealt with carry trades in the past knows that when carry trades unwind they can do so very, very quickly and the results can be nightmarish.

And this one will unwind too, causing the bubble it is supporting (US Treasuries) to collapse.

They say this for a reason. These 'professionals' never really know their craft. They learn about past mistakes and try to utilize tried techniques to address problems. When something goes wrong, they learn from it and ‘tweak’ their responses.

It is no different for economists, even those entrusted with running the Bank of Canada and the US Federal Reserve (recall Saturday’s post of a paper by Alan Greenspan admitting how the Federal Reserve had failed).

The ‘experts’ panicked when the crisis of 2008 hit.

And they responded with tried techniques (plus a few new tricks) to address the problem.

The truth is that the U.S. financial system is a house of cards that could fall at any time. A lot of economic pain is on the horizon - it is only a matter of when it comes and how bad it is going to get.

And when it does come, interest rates are going to shoot up like nothing we have seen in over 30 years.

Tomorrow, the reckoning that Canada faces.

To read the next part of our series, click here.