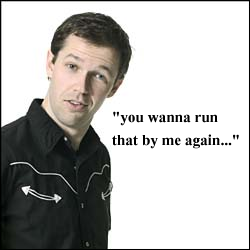 I simply shake my head.

What else is there to do?

Listening to one of my colleagues this week tell me about Mary (not her real name), a single mom who is employed in our company who had bought a home in New Westminster recently.

This on an annual salary (including overtime) of just over $64,000.

How is this possible? Emergency level interest rates combined with CMHC insurance, of course.

With this as a backdrop, I almost choked on my morning coffee yesterday when I read that Finance Minister Jim Flaherty had proclaimed that "there does not appear to be a bubble in the country's housing market and that the level of consumer defaults has not increased in any significant way."

As many of you are probably already aware, a report by the Certified General Accountants Association of Canada released on Tuesday showed that Canada ranks first in terms of debt-to-financial assets ratio among 20 OECD countries.

The report, titled "Where Is the Money Now: The State of Canadian Household Debt as Conditions for Economic Recovery Emerge", showed Canada ranks first in terms of debt-to-financial assets ratio among 20 OECD countries. We are ahead of the Slovak Republic and - remarkably - Greece.

The U.S. came in a close fourth.

"When household indebtedness is measured as a ratio of consumer debt to financial assets, it becomes clear that Canadian households rely much more heavily on consumer credit than their counterparts in other countries," the report explained. Canadians' debt-to-income ratio reached 144% by the end of 2009.

Household debt in Canada reached a new high of $1.41 trillion in December 2009. If household debt was spread among all Canadians, each person would hold more than $41,740 in outstanding debt - an amount 2.5 times greater than 1989, according to the study.

Experts in the report point out if mortgage rates go up by just two percentage points, mid-income to mid-to-high income families could face having to cut 9% to 11% from "other expenses," in order to maintain their current standards of living.

And we all know full well that this isn't a hypothetical situation that the report is posing.

(everyone, that is, except Minister Flaherty)

Mortgage rate increases have already begun as lending institutions, anticipating that the Bank of Canada will increase its key lending rate in July or sooner, have already increased their fixed mortgage rates.

Watch what is happening in Greece, Portugal, Spain... and soon the UK.

Because when interest rates spike upward, and the Government of Canada (through the guarentees of the CMHC) is called upon to reimbuse the $650 Billion in secured mortgages... you will see the bond vigilantes turn against our country in a dramatic and violent fashion.

It will not be pretty.