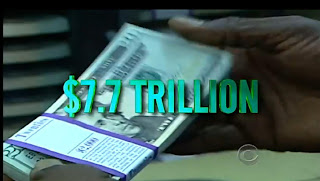 In the first week of December we talked about how Bloomberg had uncovered that the US Federal Reserve bailouts of the banks was much higher than previously known. According to documents released through the Freedom of Information Act, the bailout given to America's big banks was far bigger than the Federal Reserve let the public, and even members of Congress, know.
The US Federal Reserve basically provided free loans of $7.7 Trillion to wall street banks so that they could turn around and buy US Treasuries and made a profit on the interest difference - about $13 Billion (a profit which comes off the backs of the US taxpayers, of course). This is how the Federal Reserve is helping banks make money in this massive liquidity squeeze.
The youtube clip is set up to prevent embedding but you can view it by clicking here.
Another excellent clip involving Alan Grayson, former US Representative, who points out that when combined with the earlier revelations ($16 Trillion reported earlier), the Fed has bailed out the banks to the tune of $26 Trillion while all over America people are being kicked out to their homes via foreclosures.

Please read disclaimer at bottom of blog.
Posted by Whisperer at 1:14 PM