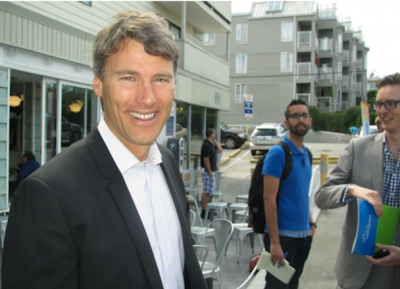 The latest on our Mayor's housing saga is that his Cambie area house has not only sold... but sold for the asking price, at least according to this from Frances Bula's blog:

Okay, this is Friday fluff, but whatever. I feel I must contribute to the ongoing deep investigations into Mayor Gregor Robertson’s change of abode by reporting that his Douglas Park-area house has apparently sold, for the asking price of whatever it was, $1.95 million or something...

No one seems to see Robertson’s move, from a single-family house near Emily Carr elementary in central Vancouver to a smaller place in Kits near the beach, as symbolic of the prototypical Vancouver downsizing. Instead, it seems to have turned into massive theory-building about how it has something to do with the Point Grey bike lane. Or his federal-election ambitions. Or something.

Readers of this blog know we have focused around the former of those two angles to this story.  The latter we touched upon Wednesday when we hilighted this Georgia Straight story:

What's intriguing about the move is that Robertson now lives much farther away from his workplace at Vancouver City Hall.
Normally, cyclists like to live closer to the office.
Perhaps this suggests there could be federal political implications for Robertson, who is sometimes viewed as a future candidate for the Liberal Party of Canada.
His old residence is in the proposed new riding of Vancouver-Granville, which is being carved out of parts of other ridings in the city. There is no MP for this riding yet.
His new home is likely in Vancouver Quadra, which is represented by Liberal MP Joyce Murray. That's because most of York Avenue is west of Arbutus Street, which is the boundary for the riding. East of Arbutus is within Hedy Fry's riding of Vancouver Centre.
Murray ran against Justin Trudeau in this year’s federal Liberal leadership race.
Whoever becomes the Liberal candidate in Vancouver Quadra is likely a shoo-in to get elected to Parliament.
Could Robertson be planning a challenge against Murray for the Liberal nomination after he wins a third term as mayor in 2014? Stay tuned.

In case you missed it, the Georgia Straight did follow up on this story.

The Mayor of Vancouver says his decision to sell his house and move west has nothing to do with federal politics.
In a scrum with reporters at the corner of Yew Street and West 4th Avenue, Gregor Robertson said he intends on remaining mayor as long as the citizens of Vancouver keep electing him to that position.
When the Straight asked if he would categorically rule out running for Parliament in the next federal election, he replied: “I can’t imagine that happening right now. As I’ve said, I’m looking at running for a third term as mayor.”
He also said: "We have a duly elected MP in Vancouver Quadra [Joyce Murray] who serves the city well."

The picture above was taken by the Straight as part of the media scrum that lead to the Straight's follow up. Looks like the media and our Mayor were having a cordial, folksy chat.

But there was a disturbing development affecting some of the very media coverage on this story that seems to have gone unnoticed by the esteemed members of our local fourth estate.
We're still trying to track down some information about it. We may have more for you Sunday afternoon.
==================


Please read disclaimer at bottom of blog.
Posted by Whisperer at 10:35 PM