"Are Canadians getting in over their heads?" 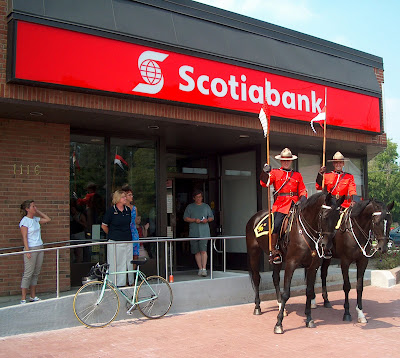 You know our answer to that question.

But this week it was Scotiabank economists Derek Holt and Karen Cordes who were doing the asking.

In a research note released last week they noted that "lenders have been scrambling to get enough product to put into the federal government’s Insured Mortgage Purchase Program over the months, and that may have translated into excessively generous financing terms"

That's econo-talk, their way of saying the banks have been giving money to people they shouldn't be.

Sounds like Derek and Karen are biting the hand that feeds them (or in the vernacular of another local company we know... they're not 'team players').

But you gotta hand it to them. They're telling it like it is.

The report goes on to note that low mortgage rates are the dominant factor in the pent-up sales demand of the last few months. "I think that's having the effect of putting people into homes at an earlier stage than would have otherwise been the case," Mr. Holt said.

Holt goes on to question whether mortgages will remain this affordable in the long term.

"I do worry, longer term, not even that far out - two or three years from now - once short and long interest rates are probably higher ... whether a lot of those mortgages will be as easy to carry as they are right now," Mr. Holt said.

And in a blaze of insight, the Globe and Mail, in reporting the story, wonders "whether a spate of good deals on mortgage rates could mean Canadians are getting in over their heads."

Please read disclaimer at bottom of blog.
Posted by Whisperer at 2:26 AM