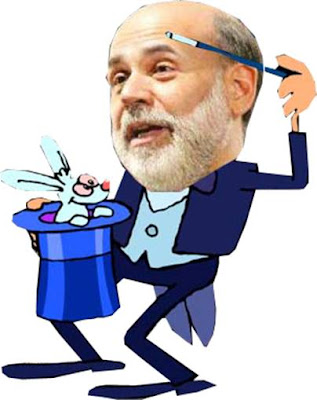 So the big news yesterday was a report released by the real estate firm Coldwell Banker in which the firm contends that "real estate in Canada is a relative bargain compared to homes in many other parts of the world."

Gee... a real estate company telling you that now's the best time to buy. No surprise there. What galls, however, is the way the media regurgitated it as news.

It wasn't. It was a press release promoting the self-interest of a real estate company, nothing more.

And it ignores the real looming threat: interest rates.

It's funny... 28 years ago the majority of people genuinely despaired that interest rates might never again drop to as low as 10%. Now... the majority can't fathom rates spiking up above 7%.

But rates will go back up, inflation will storm back, and it will all be about government debt.

Grand total: Each and every household in America is indirectly responsible for a debt burden of over 1 million dollars!

Bottom line... even assuming they can save 5% of their income year after year - and even assuming every single penny of their savings is thrown into the pot - in order to pay off the U.S. government’s debts and obligations, each American family (and descendents) would have to toil for the next 429 years.

The problem is America hasn't borrowed all that money from themselves. More than half of the outstanding national debt has been borrowed from overseas investors. And those foreign creditors are starting to recoil in horror.

Which is why the US started buying it's own treasuries with extra money it printed and added to the overall money supply. The Federal Reserve had no choice but to pump out more and more unbacked paper dollars and dump them into the economy.

And what is all of this doing to the US dollar?

It should come as no surprise that the widely watched U.S. Dollar Index, a measure of the dollar’s performance against a basket of six of the world’s major currencies, has plunged 15.1% since its high of March 4.

It’s plunging against the euro, the Japanese yen, the British pound, the Swiss franc and even the Canadian dollar.

Is this debasement of the US dollar a deliberate strategy?

Consider this excerpt from one of the most famous speeches U.S. Federal Reserve Chairman Ben Bernanke gave in 2002:

“By increasing the number of U.S. dollars in circulation, or even by credibly threatening to do so, the U.S. government can also reduce the value of a dollar in terms of goods and services, which is equivalent to raising the prices in dollars of those goods and services.”

Make no mistake about it: Bernanke is fully aware of what’s needed to defend the dollar. He could light the fuse on the greatest bull market in the history of the greenback with the stroke of a pen if he wanted to.

The sad fact is that the last thing Bernanke or President Obama want right now is a strong dollar.

Why have Obama and Bernanke failed to come to the greenback’s defense? Why is Washington continuing to spend, borrow and print knowing that by doing so they are, in effect, declaring war on the U.S. dollar?

Simple. They have no choice.

America is now the single most indebted nation in the history of the planet.

And Washington will add an all-time record $1.8 trillion to the national debt, pushing its budget deficits to almost 13% of GDP. This year and every year for the foreseeable future, Washington will have to borrow 80% of the world’s surplus savings just to pay its bills.

Gutting the dollar and triggering inflation is the only way Washington can hope to survive this massive debt catastrophe.

And when you need to borrow 80% of the world's surplus savings to pay your bills, the reality of looming higher interest rates is about as close to a sure thing you are ever going to get in the economic prediction biz.

Which brings us back to Coldwell Banker and their suggestion to Canadians that assuming hundreds of thousands of dollars in mortgage debt right now is a sound move because Canadian real estate is a relative 'bargain'.

Do I, at the very least, get a free bottle of snake-oil with that?