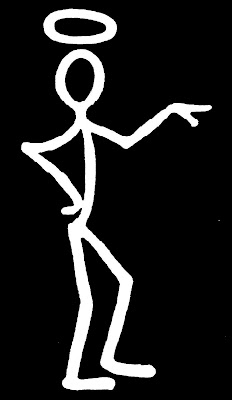 Courtesy of our friends over at VREAA, our attention was drawn to BMO’s 10 fun economic, financial facts for 2010 to impress friends at parties.

According to one of the 'fun' facts, the deputy chief economist at BMO Nesbitt Burns tells us that:

I can't help but recall the comments of a friend's Dad made about 12 years ago in Richmond.

He is a realtor, and Canadian born of Asian descent. Commenting on a new Chinese restaurant that was lined up out the door he said, "Of course there's a line-up. It's new. And Asians flock in packs to the latest fad. We are such lemmings."

Such self-depreciating humour was not out of the ordinary, but it was the first time I had heard him (or his son) make the 'herd mentality' comment. When I asked about it he stressed - with seriousness and sincerely - that it was a common trait of the community.

I wonder how much of that is a factor now.

More importantly, I wonder why more on the west side of Vancouver don't seize on the opportunity.

Carney has move heaven and earth to stave off a collapse of our real estate market in 2009 and successfully re-inflated it. He also spent the last year warning Canadians about taking on so much debt.

Carney, for his part, has stressed over and over that the emergency level interest rates are to aid businesses... that homeowners must show prudence in their decisions.

But has Carney actually been doing current homeowners a favour?

The real estate bubble is going to collapse. He knows it, you know it.

What Carney did was give you the precious gift of time.

With the real estate bubble collapsing world-wide, Carney resuscitated your fundamental asset and bought you time.

In Vancouver all that the mainstream media (and R/E media) have been able to gush about for the past 12 months is how wealthy Asians have been coming in to buy up our overpriced real estate.

(Remember, China has pumped more stimulus on a per captia basis into their economy than has America. This money has found it's way into their stock markets and is credited with fueling both domestic and foreign real estate purchases)

For 12 months Carney has warned, cajoled and scolded us about debt.

Short of hitting you over the head with a stick, he has told you to get out of massive debt NOW before it is too late.

With the real estate market resuscitated, Vancouver homeowners can realize once-in-a-lifetime capital gains from the real estate bubble at a time the rest of the world have had theirs disappear, never to be seen again.

Should we vilify Carney or praise him?

Ultimately we are all responsible for our own actions, our own decisions.

Carney has given current homeowners a chance to save their equity, pull it out, and put it in places it will grow exponentially in the next phase of the crisis.

And served up for us is this supposed steady stream of stimulus imbued Asians who will buy with cash.

I am less inclined to blame Carney for facilitating those Canadians who have tanked up even further of massive amounts of debt since the crisis began, than I am inclined to be highly critical of those who should be properly counseling us to make prudent decisions.

From where I sit, the real villain's are the R/E shills who exploit the situation and the media who have abdicated their responsibility to inform in favour of catering to their main advertising base.

The latest shining example of this condition comes from the blog Alberta Real Estate Watch who brings us this December 4th, 2010 missive from the Edmonton Sun (click image to enlarge): 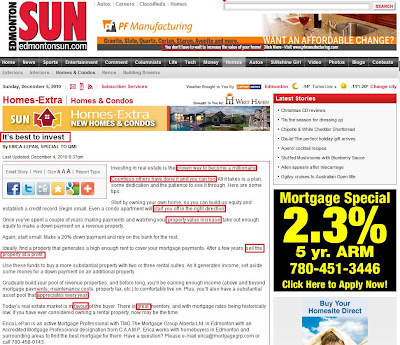 Basically the article tells you that"investing in real estate is the proven way to become a millionaire," and it will give you "an asset pool that appreciates every year"

Submitted by Erica LePan of The Mortgage Group Alberta, it is nothing more than manipulative advertising sans the typical investment warnings that 'past performance is not indicative of future returns'.

Worse, courtesy of the Edmonton Sun, it carries the aura and appearance of legitimate news.

Critics say Carney is an enabler with his low interest rate policy.

Perhaps. But at least Carney is warning Canadians about the consequences of their actions and he has given Canadian homeowners an opportunity that virtually every foreclosed-upon and distressed American homeowner would give their eye teeth to have right now.

The likes of LePan and the Edmonton Sun bear far more responsibility, IMHO.

Please read disclaimer at bottom of blog.
Posted by Whisperer at 7:43 PM