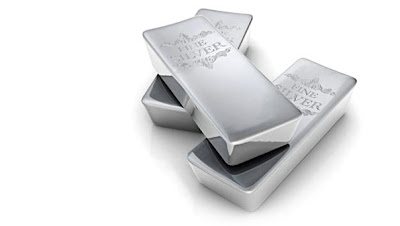 Faithful readers will recall my earlier posts on Silver-Gate here, here and here.

Basically the Commodity Futures Trading Commission (CFTC) has alleged that JP Morgan and HSBC have engaged in "fraudulent efforts to persuade and deviously control the price of silver."

In addition over six separate lawsuit have been filed alleging breaches of the Racketeering Influenced and Corrupt Organizations (RICO) Act by these two banks.

Now... the practice of naked short selling has long been a serious issue on Wall Street.

But of what we know about the scope and intent of JP Morgan and HSBC's actions in this particular short-selling scheme... well, it dwarfs any other similar attempt to manipulate a commodities market.

Intense scrutiny and attention has been brought to bear on JP Morgan in the last few months as a result of these investigations. This has severly restricted their ability to fully carry out their actions.

Silver, as a result, has shot up over 65% since August.

Many believe without JP Morgan's manipulation, silver will return to it's historic 1:16 ratio with gold. That would put silver at almost $100/oz instead of the current $29.58.

Critics, of course, say there is no manipulation and that nothing will come of this.

As reported last night on Zero Hedge, JP Morgan has come out and admitted it's massive short position and intends to dramatically reduce it.

If the topic interests you, read the Zero Hedge post.

At the moment, many believe the pledge to reduce it's holdings hasn't occurred yet and any claims that it has reduced it's position are just P/R to reduce negative media attention.

The saga still has a ways to play out. However... I suspect the almost 70% rise in the value of silver since August is nothing compared to what lies ahead.

Overnight, silver has surged another $0.30 when I wrote this (about 10:30pm last night). Action in silver is very high.

With that in mind, here is an analysis from the daily report of a silver trader I follow: