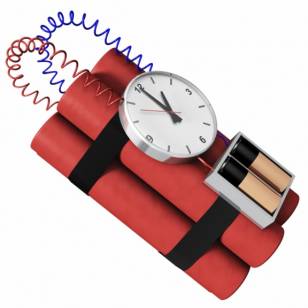 Big international news on this Easter Sunday.
Last Friday, deep in the body of the post on Silver, I mentioned that mainstream media had been slow to comment on the latest statement from the Peoples Bank of China (PBoC) wherein China's central bank Governor Zhou Xiaochuan spoke of the need to reduce foreign-reserves.
After a speech at Tsinghua University in Beijing on Wednesday, Zhou spoke of the need to reduce an excessive accumulation of foreign-reserves as those 'reserves' have exceeded a “reasonable” level and the management and diversification of the holdings should be improved.
This is the way you diplomatically say “we are sick of the US Dollar and will be taking steps to lower our holdings.”
Remember, the US Dollar is China’s largest single holding. And China has already begun dumping Treasuries (US Debt).  At the same time China (along with Russia) has started to trade in their own currencies, NOT the US Dollar.
When you add in the numerous warnings Chinese politicians have been issuing to the US over the last 24 months, Zhou's statement last week makes it very clear that China is done playing nice and is now actively moving out of US Dollar denominated assets.
Well... today we found out just how much China feels they need to 'reduce'.
China is proposing to cut two thirds of it's $3 Trillion in US dollar holdings.
The $2 Trillion China proposes to dump is equal to the amount of dollars the US Federal Reserve has been printing during QE.
This is huge news.

It brings to mind this highly sensationalized, fictitious account of how a US dollar collapse might play out.

Please read disclaimer at bottom of blog.
Posted by Whisperer at 11:38 AM

Email ThisBlogThis!Share to TwitterShare to FacebookShare to Pinterest
Labels: PBoC, US Debt, US Treasuries, video: Day US Dollar Died