Inflation actually near 10% according to CNBC 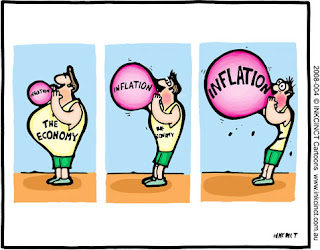 As faithful readers know, this blog has often posted that inflation is not only coming at us hard, but is in fact already here.

And today, CNBC has come out with a story saying just that.

With an article titled "Inflation Actually Near 10% Using Older Measure", CNBC confirms what the blogosphere has been saying for almost a year now.

In case it gets yanked, here is the full story:

=====================
After former Federal Reserve Chairman Paul Volcker was appointed in 1979, the consumer price index surged into the double digits, causing the now revered Fed Chief to double the benchmark interest rate in order to break the back of inflation. Using the methodology in place at that time puts the CPI back near those levels.
Inflation, using the reporting methodologies in place before 1980, hit an annual rate of 9.6 percent in February, according to the Shadow Government Statistics newsletter.
Since 1980, the Bureau of Labor Statistics has changed the way it calculates the CPI in order to account for the substitution of products, improvements in quality (i.e. iPad 2 costing the same as original iPad) and other things. Backing out more methods implemented in 1990 by the BLS still puts inflation at a 5.5 percent rate and getting worse, according to the calculations by the newsletter’s web site, Shadowstats.com.
“Near-term circumstances generally have continued to deteriorate,” said John Williams, creator of the site, in a new note out Tuesday. “Though not yet commonly recognized, there is both an intensifying double-dip recession and a rapidly escalating inflation problem. Until such time as financial-market expectations catch up with underlying reality, reporting generally will continue to show higher-than-expected inflation and weaker-than-expected economic results in the month and months ahead.”
The pay-site and newsletter by Williams, an economic consultant for the last 30 years to companies, has gained a cult following among bloggers hungry to criticize Bernanke these days. The mission statement of the newsletter, according to the site, is to expose and analyze “flaws in current U.S. government economic data and reporting…net of financial-market and political hype.”
Investors are anxiously awaiting the release of March’s CPI reading on Friday. The consensus estimate from economists is for an annual inflation rate of 2.6 percent.
“Given ongoing inflation problems with food and the spreading impact of higher oil-related costs in the broad economy, reporting risk is to the upside of consensus expectation,” said Williams, citing a 10 percent jump in gasoline prices in March, in the note.
“While the federal government would have us believe the numbers are rather tame, our own personal gauge leads us to believe inflation is running between 5 percent to 6 percent annually,” wrote Alan Newman in his latest Crosscurrents newsletter that refers to Williams’ statistics.
Newman uses recent comments from Walmart CEO Bill Simon that inflation is going to be “serious” to back up the much higher CPI figures from him and Williams.
“Given Walmart's sales of $422 billion, we think Mr. Simon has a good idea of what’s in the pipeline,” said Newman.
To be sure, the BLS argues that the changes it has made over the last three decades more accurately reflect a true change in the cost of living. For example, in response to its hedonic adjustments, the BLS web site states, “to measure price change accurately, the CPI must be able to distinguish the portion of price change due to this quality change.
Still, going by recent strong comments from Federal Reserve officials, even members of the central bank must believe inflation is being underreported. Dallas Federal Reserve President Richard Fisher said in a speech last week that the central bank was reaching a “tipping point” as far as changing its policy so it can react to inflation. Maybe Fisher stumbled across Shadowstats.com. The voting member did, after all, mention Volcker in the same speech.
“The need to break the back of that (budgetary debt) spiral is as dire now as was the need for Paul Volcker to break the back of inflation in the 1980s,” said Fisher on April 8th. “As a result of his steadfast determination to press on with exorcising inflation, Mr. Volcker is today among the most respected living Americans and widely considered an exemplar for public servants worldwide.”
==================

Please read disclaimer at bottom of blog.
Posted by Whisperer at 2:50 PM