The media discusses the August 2012 real estate numbers... lipstick anyone? 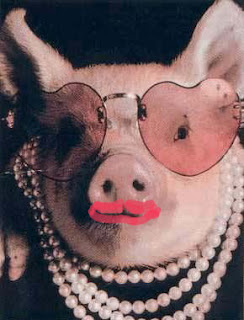 It seems there's no way to put lipstick on the horrid real estate statistics for the month of August.
If you didn't catch it, the lead story on CTV Vancouver news tonight is the slumping Vancouver real estate market. Unfortunately I can't embed the clip here but you can click on the link to see – CTV profiles how experts are beginning to wonder if Vancouver’s real estate bubble is going to burst"
Meanwhile the Financial Post headlines Vancouver home sales plunge, posting second-worst August since 1998.
How bad are the numbers?
As VanPro over on the blog Real Estate Talks notes the overall Months of Inventory (MOI) is approaching 11 months.

As we said at the start of summer, the numbers from July and August were going to be fascinating to watch... and they were.
Normally listings drop of dramatically and sales slow. What we got was only a slight pull back in listings and sales plummeted.
Prices in areas like Richmond, with homes that are actually selling, have begun dropping below assessed value. We are seeing sales activity pick up a bit as the price point has been reached for a few that are hovering (one of the signposts we look for as the market begins it's collapse).
A larger number of high end sales were completed last month (another of those signposts). But even here prices are dropping. A few days ago we provided you with stats of the high end sales in August up to August 22nd - one of them for just over $12 million. As the month came to a close, we now know there was a second $12 million sale. But these two properties started off with asking prices of $16 million and $14 million.

They say on the way down, prices are very, very sticky. But they are starting to move.
Normally listings really start to pick up in September and sales remain constant through September. With the current steady diet of bearish real estate news, the September surge in listings will be met with more dismal sales as the negative feedback loop picks up momentum.
We are currently sitting on an all time record streak of 16 consecutive days with daily sales totalling less than 100 per day - despite the fact that we just passed a three day weekend (when normally we see a bump in sales from the longer non-reporting weekend sales.


Please read disclaimer at bottom of blog.
Posted by Whisperer at 11:52 PM