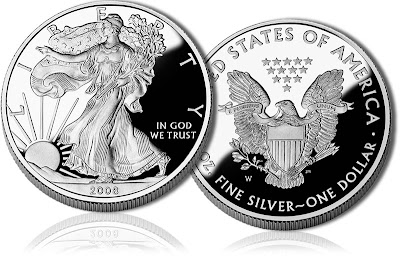 Been very busy but a quick post with a few quick notes about Silver.

As of today the US Mint has sold a massive 4,588,00 ounces of silver during the month of January.

How significant is this total?

The month isn't over yet and already the US Mint is on track for the biggest monthly total of silver sales going back to 1986 when the Mint disclosed its first monthly sales record.

Yes... the US Mint is going to sell more silver this month than in any month in its history.

Scotiabank continues to be sold out of 1 oz and 100 oz bars and Europe's BullionVault (which has been sold out for the past week) has only just received more inventory for sale.

Reuters reported shortages of 1 kilo gold bars in Asia last week. Sprott Asset Management reported that it was experiencing difficulty sourcing 1,000 oz silver bars. Sprott said they were concerned about the “illiquidity in the physical silver market" and said delays in being able to source physical silver highlights the “disconnect that exists between the paper and physical markets for silver."

So reports of shortages of silver bullion continue to grow. Having said that it is important to note that are no widespread shortages yet. Dealers with extensive supplier networks like mints and large refiners are not experiencing difficulties sourcing bullion inventory, but it would be wise to keep an eye on this.

Yet in the midsts of all of this, those o you who have been following silver lately know that the price has been dropping drmatically lately and almost dipped down to $28 (althought it surged upward today on a raid free Tuesday).

Both gold and silver have really been seriously clobbered since late in the afternoon on January 13.

Price drops of this magnitude don’t just happen by accident. And there is some interesting speculation which is worth paying attention to.

On Thursday, January 13, Moody’s Investor Services issued a report stating that the current fiscal situation in the US is such that, if not reversed, it will result in a lower credit rating for US government debt. Sarah Carlson, senior analyst at Moody’s, said, “We have become increasingly clear about the fact that if there are not offsetting measures to reverse the deterioration in negative fundamentals in the US, the likelihood of a negative outlook over the next two years will increase.”

The same day Carol Sirou, who heads Standard & Poors in France, said in a speech, “The view of markets is that the US will continue to benefit from the exorbitant privilege linked to the US dollar” to fund deficits. “But that may change. We can’t rule out changing the outlook” on US government debt. She later said, “No triple-A rating is forever.”

These twin announcements had the expected effect on the value of the US dollar, which dropped in value against other currencies about 1% last Thursday afternoon and that drop has continued.

Normally, when a currency declines like that, alternative safe haven assets rise in price.

Gold and silver would typically experience higher demand and higher prices. However, rising precious metals prices would reinforce the decline of the US dollar. Therefore, the US government had a huge incentive to prevent gold and silver prices from rising.

That appears to be almost exactly what happened. Usually, when gold and silver prices are falling, the number of open contracts on the COMEX declines as traders sell off their long positions. Short buyers who purchase such contracts then close out their position.

In the past 72 hours, there has been a significant increase in the open interest, which is a sign that one or more parties (say hi to JPMorgan Chase and HSBC) have sold as many short contracts as it took to push down the prices of both metals.

Of total COMEX silver inventories, about 50 million ounces is currently registered, meaning that it is automatically available to cover delivery commitments of maturing contracts. That amount could be absorbed by fulfilling only 10,000 contracts. Today the open interest silver contracts rose from 73,626 to 75,575, no doubt sending shivers through the banking front offices.

There are extensive rumors flying that an unusually large number of December 2010 contracts were held for delivery of silver, which was not physically possible.

Instead, many of them were supposedly settled for cash, often at a premium to “spot” price (estimated at 30%). This certainly would explain why the price of silver rose almost 50% in the last three months of 2010.

Apparently this tactic was so profitable for hedge funds and other deep-pockets investors that they are gearing up to repeat the process with the March 2011 silver contract on a much larger scale.

At current prices, $1.5 billion could purchase the 10,000 contracts needed to deplete the entire stockpile of COMEX registered silver.

The rumors are that these buyers are looking to jump in to make purchases during February and eventually force the price of silver up to about $45 before the end of March. Obviously, there are many hedge funds, private investors, and sovereign wealth funds that could raise enough cash to handle this raid on the COMEX silver market all alone.

However, you can be sure that the traders for banks that hold huge short positions (did I mention JPMorgan Chase and HSBC?) are hearing of these plans.

One defensive tactic to hold off the onslaught would be to dump a lot of paper contracts on the gold and silver markets to force down prices before the buyers start making their purchases in February. Then, when prices have fallen significantly, the short sellers could purchase lots of contracts and physical metal to help them fight back against the supply squeeze effort and also to discourage a planned raid on the COMEX inventories.

Hence the significant drop in gold and silver prices right about now!

Who knows. But it bears watching.

Finally there is this story on SeekingAlpha on silver which is interesting.

Please read disclaimer at bottom of blog.
Posted by Whisperer at 11:22 PM