Today's letter is M: As in Media and Manipulation 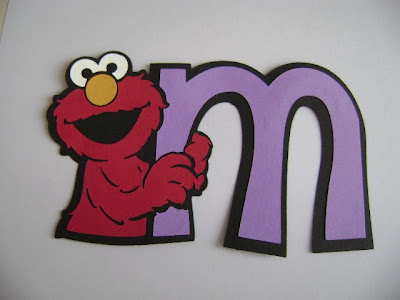 Garth Turner covered this yesterday and I wanted to take the time to point it out to my colleagues who read this blog.

The battle over mortgage terms is starting to heat up. As many of you know Mark Carney, Governor of the Bank of Canada came out in December with another salvo of debt warnings. This was followed up by a couple of Banks (TD, BMO) calling on the government to take the initiative because they could not be expected to curb debt lending for competition reasons.

The concern? The vast majority of new home loans are being written are 5/35ers and the debt loads are becoming alarming amongst Canadians.

Carney has been urging Ottawa to do something about it as well and Finance Minister Jim Flaherty has hinted changes might be coming.

Real estate agents and brokers are being urged to write their MPs immediately to counteract this move. They argue that mortgage debt isn't the same as other consumer debt. It's “the foundation of household equity and a gateway to financial security.”

More importantly, it's the foundation and gateway to Realtor financial security (aka paycheques).

In a desperate attempt to save paycheques, this urgent communication has been sent out to all member Realtors (click on image to enlarge): 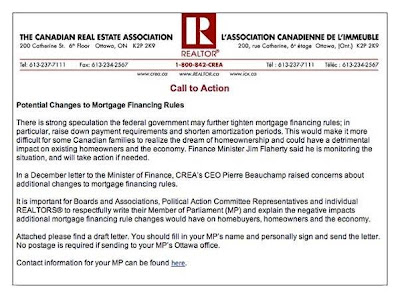 Meanwhile, despite concerns that these moves could kill the real estate market, the full court press is being applied to get the general public to BUY, BUY, BUY before they are priced out forever.

Royal LePage has come out with a report predicting real estate prices increasing in Canada in 2011 far more than expected. The report is titled, "Strengthening Economic Recovery and Low Interest Rates Point to a Stronger Than Anticipated 2011 for Housing Market".

This is in conjunction with the R/E industry's own version of the Art of Media Manipulation. Newspaper articles touting the R/E line magically appear at the same time.

Seems to me if the government simply tightens regulations, prices will fall and then people can buy houses at affordable prices, a move which will make Carney happy and keep Realtors employed as more houses trade hands.

But I guess if you eliminate the huge commission from the sale of multi-million dollar homes, Realtors will have to work harder.

Over in the Silver Corner

Two interesting items for you from yesterday in Silver.

First from Zero Hedgee comes this announcement that the CFTC will be voting on 10% position limits next week in an attempt to control the rampant manipulation going on in precious metals.

Second is this thread on a Yahoo messageboard. This could be interesting just for the speculative value if this goes viral on the internet: