On Monday we posted that the big news for real estate watchers in the Village on the Edge of the Rainforest was that not one single detached new home had sold in the month of September on the west side of the City of Vancouver.
This is significant because the west side is an area that has been considered the hottest real estate market in all of Canada.
One of the rationals being offered to defend this 'temporary aberration' is the decision of BC voters to rescind the Harmonized Sales Tax (HST) in a referendum last month.
The HST was to replace the old PST (provincial sales tax) and the federal GST.  But the new tax would tax items not taxed under the PST/GST arrangement. Specifically it would tax newly constructed real estate that sold for over $500,000, which in Vancouver is just about everything.
The HST has been voted out, but it will be over a year before the Province switches back to the old PST/GST tax structure.  Are we to believe that construction and buying has all but stopped as buyers wait for the levy to disappear more than a year from now?
Above is a story by Global TV which is making that very claim.
Now the Global TV story focuses on lower end new homes which would be marketed to local incomes. But defenders are offering this rational for the west side of the City of Vancouver, where tear downs are going for $2 million and larger houses are going for twice that.
Over and over we have been told that the west side of Vancouver is an exception to the rule, an area that has been skewing Lower Mainland statistics because rich Asian money is buying up property there. Local incomes aren't supposed to be coming into play because, as a world class city, the west side is attracting a new reality - a buyer for whom money isn't an option.
So if this influx of foreign money is creating a new paradigm of values, what gives with September's stunning lack of sales?
Are we now to believe that someone laying down $4 million for a house will really be dissuade from buying over the next 18 months because they really care about a few hundred thousand more in tax?
Is foreign money really establishing a new paradigm in Vancouver, or (as Garth Turner has suggested) is the new paradigm of foreign money on the west side nothing more than realtor-created, media-infused, jingoistic marketing crap?

Rationalizations for last month's results abound. Curiously no one locally, except the blogosphere, is suggesting the bubble may be ready to pop.

Speaking of realtor-created, media-infused, jingoistic marketing crap, take a look at this realtor's site for an example of the hype which reinforces the notion that the Vancouver market is being driven by wealthy Chinese buying up real estate here. 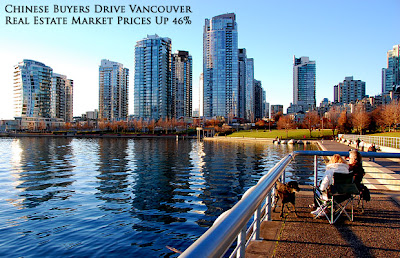 Asian savious aside, the fact remains, there were zero (0) sales of new, detached homes on the west side of Vancouver in the month of September.

There is more happening here than just the HST.

Fellow blogger fish has posted stats for September over on his blog Vancouver RE and then some.

Of note, in Greater Vancouver sales rank as the third lowest in the month of September over the last 10 years. Months of inventory sits at 7.2.

In the Fraser Valley this is the third month in a row based where lower sales have combined with a higher influx of new listings. Months of inventory sits at 8.7.

In Victoria months of inventory has climbed to 10.8.

And on the Sushine Coast, months of inventory is a stunning 17.5.

Of course prices have not begun to fall yet.  With rising inventory, how long before the Real Estate industry starts to beat the drums that this is a 'buyers market' and that you need to support the market by buying now.

But if prices are still well above what local incomes can support, what can entry level buyers do?

Hmmm... perhaps it's time for yet another example of realtor-created, media-infused, jingoistic marketing crap.

Please read disclaimer at bottom of blog.
Posted by Whisperer at 2:11 AM