There will be no US-style housing correction in Canada, or so says Royal LePage 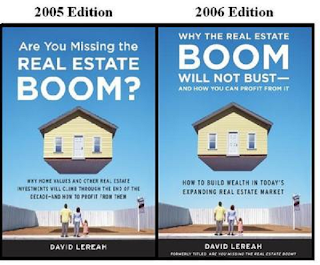 Just 'cause we wanna refer to this down the road, we bring to you today the latest from Phil Soper, president and chief executive of the real estate company Royal LePage.
Gee Phil, how comforting to know the raison d'etre of your business isn't a concern.
This comes, naturally, as many real estate observers have appeared in mainstream media predicting Canada’s housing market is set for a major correction as record low interest rates have spurred buyers to take on more debt than they can afford,

But Soper doesn't want you to be concerned.
He says prices in some markets are over blown, but "the Canadian economy is structured differently from that of the U.S., making a collapse unlikely."
Ahh, yes... Phil tells us it's 'unlikely'.
It brings to mind David Lereah, the man who was the chief economist of the US National Association of Realtors when the US Housing Bubble started to implode.
For those of you who don't know him, Lereah gained eternal notoriety when he brashly told everyone that - despite overwhelming evidence to the contrary - the US housing market was going to keep on chugging forever.
And Lereah did more than issue rosy forecasts.
Not only did he regularly trumpet the infallibility of housing as an investment in interviews and on TV... the brash Lereah even wrote a book in 2005 titled, Are You Missing the Real Estate Boom?.
Lereah says he grew concerned about the direction of the market in 2006, but that didn't stop him from re-issuing the book under the new title, "Why the Real Estate Boom Will Not Bust."

Even in January 2007, when the crash was picking up steam, he boldly stated: "It appears we have established a bottom."
Lereah is infamous for his cheer leading efforts during the height of the bubble and then later when he was denying that the industry was going bust.
Four years after that fiasco, as concerns spread that the Canadian Bubble is unsustainable and on the crest of imploding, the head of one of Canada's largest Real Estate companies tells us a collapse is 'unlikely'.

Please read disclaimer at bottom of blog.
Posted by Whisperer at 4:14 PM