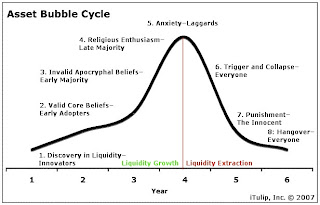 We didn't get around to it, but last week economist from another Canadian bank came out forecasting trouble for BC Real Estate.
TD Bank predicts BC will face 'real estate trouble' over the next two years but attempts to soften the blow by saying CANADA will not suffer a bust in the housing market.
Comforting, I guess, but let's face it... the rest of the nation is nowhere near the type of bubble we have here on the left coast.
Perhaps that's why TD added that, "British Columbia is forecast to have it worse and will likely see a signifcant correction this year".
Strong words but what is 'a significant correction'?
The TD report examined the country's provincial economies and projects home resales in British Columbia to sink 3.7% this year and prices to decline 3.5%. The report also talks about 2013 and says, "the correction will extend into 2013, as unit resales fall a further 5% while prices slip 4.4%."
So TD see's the market dropping over the next two years and that prices will drop 8%, a correction TD calls 'significant'.
8%?... is that really 'significant'?
Perhaps what is more significant is the growing consensus that the housing market is going to suffer a downturn.
When even the banks are telling you that houses are going to be cheaper a year from now (twice as cheap two years from now), do you buy?
And with sales down 12.9% in Greater Vancouver last month, will even more buyers shy away from the market in the months ahead creating even more intense downward pressure on prices?
The first six months of 2012 are going to be extremely interesting to watch.
==================