Is a US dollar dump underway? 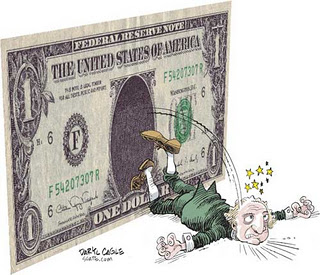 Zero Hedge notes the US Federal Reserve provides a weekly update known as the H.4.1.
Observers of the Federal Reserve's Custodial Treasury account follow these updates with keen interest. Recently they have been somewhat perplexed.  There has been a continued, weekly selloff of $56 Billion of US Treasury's.
Is the continued drop an asset rotation - under duress or otherwise - out of bonds and into stocks, to prevent the collapse of the global ponzi? Or, as Zero Hedge pondered, has the dreaded D-day in which foreign official and private investors finally start offloading their $2.7 trillion in Treasurys with impunity arrived?
Recall that a few months ago China has made it abundantly clear it will sell its Treasury holdings, the only question is when.
The most recent came out on January 4th and a further $17.7 billion has been "removed" from the Fed's custodial Treasury account.
The alarm bell that is going off her is that in six consecutive weeks, foreigners have sold off more government bonds in a sequential period of time than ever before. It means that someone, somewhere is very displeased with US paper, and, far more importantly, they want to make their displeasure heard loud and clear.
It is an interesting development worth watching.  The consolidated outflow notional is now a record high $77 Billion (beating the previous record of $52 Billion). Should the selloff accelerate, look for the Federal Reserve to have to step in.
The real question is what they are converting the USD into? And how much longer it will go on for?
The last thing the US can afford is a wholesale dumping of its Treasury's. The traditional diagonal rise in foreign holdings of US paper has not only pleateaued, but it is in fact declining: a first in the history of the post-globalization world.
==================

Please read disclaimer at bottom of blog.
Posted by Whisperer at 12:20 PM

Email ThisBlogThis!Share to TwitterShare to FacebookShare to Pinterest
Labels: destruction of US dollar, US Dollar, US Federal Treasury, Zero Hedge