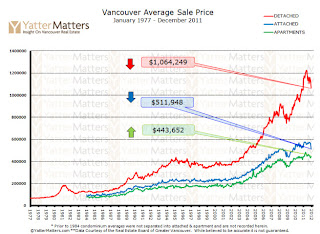 Happy New Year everyone. First up this week is information on the Real Estate front.
With almost everyone now seemingly calling for a correction of some kind the data for the month of December 2011 is keenly anticipated.
Realtor Larry Yatkowsky is out with his latest graph (click image above to enlarge) and looking at the figures for Single Family Houses (SFH) you certainly have to wonder if the long anticipated correction may have begun.

As you can see it isn't a straight drop, but it is a stunning 13% decline from the high of 7 months ago. Another interesting statistic is Inventory.

When you compare December of 2011 to December of 2010, the total inventory for sale is up 17%. Meanwhile total sales are down - also by 17%. While December is always considered a slow month, this large boost in inventory with a corresponding drop in sales activity is significant. And the downward trend on the average price graph certainly stands out and captures your attention.
All eyes are now focused on the Spring market. Will the number of listings start to accelerate with listings ballooning in January, February and March? Will sales continue their downward slide as buyers hesitate for fear of catching a falling knife?
And what of the growing number of Boomers approaching retirement - 70% of whom lack sufficient funds for the Golden Years and whose entire retirement 'plan' lies solely in selling their bubble value property to cash in on those gains and downsize?

Will there be a rush to list and complete a sale even if it means accepting significantly lower offers beyond the current 14% drop from the bubble highs? They would still be making a massive profit over what they paid 30 - 40 years ago so the ability/willingness to accept what would currently be considered low-ball offers is there.
We continue to watch with fascination.
==================