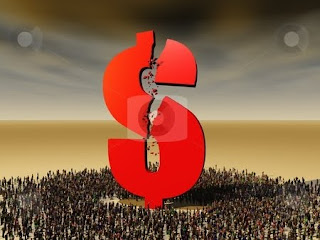 Well I think you can definitely say the alarm bells are ringing everywhere you turn now.
Royal Bank is the latest with warnings.  And this is no tiny warning.
No only does RBC tell us the Village on the Edge of the Rainforest may experience a correction.  Canada's biggest bank is now afraid we are vulnerable to a "marked correction."
Says the Huffington Post:

If you haven’t heard yet that Canada’s housing market is facing potentially serious problems, you’ve probably been hiding under a rock, but a recent study and comments from Canada’s top banker are bringing the point home once again.
A report from RBC released Thursday says Vancouver’s housing market is 'vulnerable to a marked correction.' For a market analysis from a major bank, those are pretty strong words.

Strong indeed.
Even scarier than the rhetoric about a looming catastrophe are the hard core statistics from the report:

“Typical Vancouver-area homebuyers would need to allocate 92 per cent of their income to carry the costs of a two-storey home (based on market price) and almost 45 per cent for a condominium apartment.”

RBC says they expect house prices in Vancouver to fall between 7 and 12%.
When you consider the average price is already down 20% from last May, this forecast from RBC is devastating news for a city whose economy is reported to be over 30% dependant on real estate.
Perhaps even more disturbing is that the numbers quote by RBC are very conservative compared to what Bank of Canada Governor Mark Carney hinted Wednesday might be the actual scale of a Canadian housing correction.
As the Huffington Post article noted:

In some markets that ratio is worse.
Vancouver housing is estimated to cost 9.2 times the average income.

The tension between Canada’s booming housing market and the weakness in the global economy is at the heart of Carney’s dilemma: Whether to raise interest rates to halt a growing real estate bubble, risking an economic slowdown, or to keep them low, and risk blowing up even larger bubbles in Canada’s economy.
Carney has hinted in recent interest rate decisions that the day is nearing when Canadians will no longer be able to count on historically low interest rates.

The RBC report makes it clear that interest rates will be a major factor in determining the dierction of house prices in the months to come, but highlights a wild card in the equation: Foreign real estate investors who have been snapping up residential properties and driving up house prices.

“Risks will be further heightened by Vancouver-area valuation’s dependence on a strong and steady flow of wealthy foreign buyers and recent immigrants — a phenomenon that is both poorly documented and potentially vulnerable to adverse external shocks."

And that's the kicker.
If the market starts plummeting, not only will the "strong and steady flow of wealthy foreign buyers" further evaporate... you could see those same foreign buyers start dumping properties to cut their losses.
At which point calling it a "marked correction" will be a generous understatement.
==================


Please read disclaimer at bottom of blog.
Posted by Whisperer at 11:41 PM