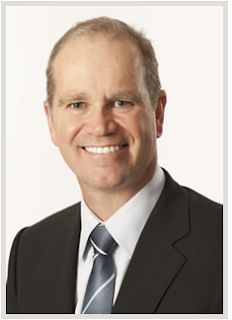 He's the head of INVIS Team RRP, the mortgage brokerage company which was the subject of the latest real estate media scandal we brought to you March 28th.

Rob has been a trusted media commentator on mortgage issues since 2000, regularly providing his insights to print, radio and television journalists. He has served the mortgage industry as a board member on a national and a provincial level since 2006.

That reputation for trust took a bit of hit when this article from the Financial Post came out: 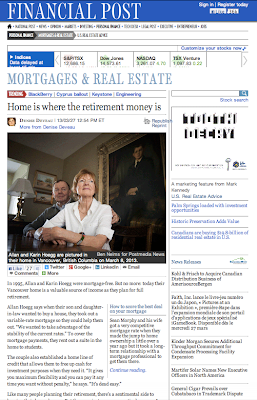 As you may recall the article, a recent retirement piece in the Financial Post focusing on how high home values factor into retirement planning, introduced us to Allen Hoegg and wife Karin. After giving us the Hoegg's background (with requisite problem/issue), the FP profiled INVIS Team RRP along with solutions to the dilemma faced by the Hoegg's.

The glaring omission gave the article the appearance of a glorified advertising piece for Team RRP.

The scandal intensified when it was discovered that the freelance author of the Financial Post article happens to appear as an employee on two communications company websites (since deleted since this story broke). One of those communications companies outwardly boasts of their successes in obtaining media coverage for their clients, coverage which appears to come from placing those companies in what look like benign news stories.

Sort of like bringing the practice of product placement to the newspaper industry.

The whole matter raises disturbing questions about the concurrent relationship of the article's author to the Financial Post while associated to those PR firms.

Meanwhile the entire issue is anything but good PR for Team RRP.

For what does it say if a business misrepresents an employee in a news article? If they would allow a simple white lie like that, would you want them to provide investment advice for you?

Correcting this perception may be what lead several members of the INVIS team to contact this blog last week.

First it was Gary Siegle, VP of INVIS Prairies.


I did some further investigating since RRP and team are well known to me and [this] scandal does not fit in the least with the profile and reputation of Rob and his team.

This article was initiated by the communications company not RRP as is suggested.

RRP made full disclosure to the journalist as to who Allan Hoeg (sic) was and his relationship to the RRP team.

Through the editorial process, some comments were taken out of context.

Next we heard from Rob Regan-Pollock.


Mr. Siegle advised me of this incident as part of our company's governance. Happy to share facts with you and your readers.

Postmedia contacted our Marketing Dept requesting a western broker to interview for a retirement piece focusing on how high home values factor into retirement planning.

I was introduced to Denise Deveau... and was interviewed. She asked if I knew of any retirement aged individuals who met the profile and introduced my employee Mr. Hoegg with full disclosure.

Regan-Pollock wasn't just concerned about the omission of Allen Hoegg as an employee. There were other errors in the article, errors with some of the actual investment advice itself. In a subsequent  email Regan-Pollock said:


[I] did provide my employee’s contact details with full disclosure. Yes I expected disclosure in the article. When I did read it, I was concerned about the non-disclosure and [a] truncated quote to borrow from your line of credit if you can’t make ends meet.

What I had said was, “that when RRSP’s or investments are below book value, rather than crystallize the loss and face the double whammy of having to pay income tax, a homeowner line of credit can act as a good buffer if one can’t make ends meet."

This was truncated to "borrow from your home equity if you can’t make ends meet", which we do not support. Rather we recommend having tools consumers can use, especially in these volatile times.

Once the article was published, did Mr. Regan-Pollock try to contact anyone to correct the errors?


[I] did not have a chance as Denise called to advise of some issues she was facing as a result of her non-disclosure of Allan as my employee. [She] called to ask if he was full or part time. Allan is Part Time. Given her challenges I didn’t push for a correction on my quote.

So if Team RRP didn't initiate the article, was Ms. Deveau working on behalf of a PR communications firm for the parent INVIS company? Regan-Pollock says he doesn't think so:


When Denise Deveau contacted Marketing, she mentioned she was contacting us on behalf of Post Media for an article she was writing. Invis as a National firm is often contacted by media... Denise contacted our VP of Marketing Kelly Neuber for an article Denise was writing for Post Media, requesting preference for a Western Broker where home values are higher for a retirement piece.

We were advised Post Media could run the article in a number of their publications. No specific publication was mentioned so we did not know this was going to run in the FP. I will confirm my belief that Invis is not a client of Blue Sky on Monday. We were simply the advisors who could assist Ms, Deveau who was writing for PostMedia.

Appreciate the ability to clarify as our reputation is all we have.

Rob Regan-Pollock clearly indicates that his firm did not initiate this article. When contacted, he was very clear and upfront about fact that Allan Hoegg was a part-time employee of his. Furthermore a key part of his advice was 'truncated,' conveying a practice his firm clearly does not support.

There are still many unanswered questions in this affair.

We'll update you if we learn any more.