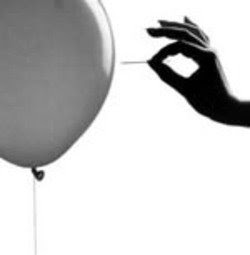 TD says that this boom was "a time of unsustainable price increases."

During this boom "affordability eroded severely over the last two years demonstrating an unsustainable disconect between house prices and incomes that was due for a correction."

"The steep erosion of affordability and the persistance of increases in house prices signal that speculation fueled this inflation. In a self-fueling spiral, expectation of higher prices were in turn driving prices even higher... The excess was most exagerated in the past three years."

The report goes on to make a foreboding statement which has particular relevance for Vancouver and echos what we have already said on this blog. The report notes, "over the long term, housing cannot exceed what households are able and willing to pay to live somewhere. House prices are necessarily tied to incomes. As well house prices are anchored by rental rates."

The Vancouver housing market has been in violation of those basic fundamentals for several years now. It means Vancouver is still severely overpriced and headed for a massive crash.

The report suggests an outlook for real estate that forcasts a potential of "seven years of hardship".

Looking at each province in Canada we read that "affordability in British Columbia has generally been the worst in the country and deteriorated even further during the past two years. Some of this deterioration in affordability can be explained by the settlement of retiree or immigrant households who have substantial wealth but not necessarily high current incomes. Nonetheless, during 2007 and 2008, resale houses in B.C. were over-valued relative to long-run fundamentals by at least 7%."

The report paints a very negative future for the condo market saying, "similar to Toronto, the Vancouver condo market may face a deeper structural weakness. The resale market already having deteriorated sharply, and, given the historically high number of multiples under construction, a surge of unsold condos is likely yet-to-come."

The report predicts a looming glut of over 4,000 new condos on the market for sale.

Adding to the woes in Vancouver will be the absence of Asian buyers. "As Asian markets are walloped, offshore owners may choose to liquidate (their) assets."

The prospect for 2009 in BC? "We project that the average house price will fall by approximately 15% relative to its current level over the course of 2009."

There were moderating comments in the report. The authors (Grant Bishop, Economist & Pascal Gauthier, Economist) do not expect the Canadian market to crash as hard as the US market, at least not yet. Nothwithstanding it is an astonishing report from the Banking Industry which has, until recently, been very bullish on real estate.

With the comments of Bank of Montreal's chief economist yesterday and this report from the TD Bank... one thing is crystal clear. The Banking Industry is rapidly abandoning the R/E shill bandwagon.

Email: village_whisperer@live.ca
Posted by Whisperer at 3:29 AM