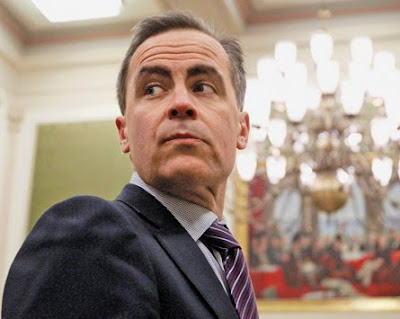 "Don't be fooled by the quick recovery". That's Bank of Canada Governor's bit of sage advice to Canadians.

Carney went to great pains on this weekend to tell consumers, executives and investors that they would be wrong to conclude it is business as usual these days.

“Anyone who sits and looks at what happened and says, ‘Well, that wasn’t a Great Recession,’ hasn’t appreciated the scale of what was done to ensure an outcome that wasn’t as extreme as before,” Carney told reporters on Saturday. “Particularly on the fiscal side. Anyone who doesn’t appreciate the gravity of the last couple of years hasn’t thought through or appreciated the scale of what will be required to adjust fiscal back to normal.”

Think about that for a moment.

Carney is emphasising what we have been saying on this blog all year. And 'adjusting' back to 'normal' isn't going to be an easy process.

And what concerns Carney most of all?

Why... sovereign debt, of course.

“We’ve seen war-like spending in peacetime,” Mr. Carney said. And the fact of the matter is that the world economy still is being powered mostly by hundreds of billions in government spending and extraordinary monetary stimulus. The growing debt – mostly public, but also private, as consumers in countries such as Canada took advantage of record-low interest rates to borrow and spend – is fundamentally changing the makeup of the global economy.

“What we are seeing with Greece, and what we have been seeing over the last few weeks, are the indications of the limits of fiscal stimulus,” Mr. Carney said. “There are a number of countries that are having to make adjustments, or will have to make adjustments, to more sustainable fiscal paths and I think that is an increasingly shared realization.”

And two of the countries foremost on the list of those that are going to have to make adjustments are the UK and the United States.

“We have to look at that and think of how to rebalance our own economic activity,” he said, referring to the relative weakness of Canada’s primary trading markets in the U.S. and Europe.

Make no mistake... there are serious hard times ahead. We're in a false recovery, and no one is more acutely aware of that than is Mark Carney.