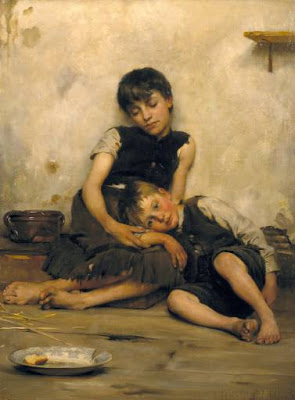 As we discussed earlier this month, the US Federal Reserve's program to buy up Mortgage Backed Securities ended at midnight March 31st and the market was now on its own for the first time in over one year.

Bond fund manager's like Bill Gross have begun steering more of their money away from bonds as Washington unplugs the economic life support programs that kept rates low through the financial crisis.

Yields have started to climb and twice in a span of two weeks we have seen Canadian banks raise their mortgage rates despite no action from the Bank of Canada.

And looming in the background is the plight of the Orphans.

US players such as Xceed Mortgage Corp., GMAC Residential Lending and Wells Fargo were allowed access to Canadian markets to offer mortgages to high risk clients.

In other words they offered Canadian subprime mortgages to clients who could not qualify for CMHC mortgages.

But in the wake of the financial crisis of 2007/2008, the business of subprime loans has dried up. Prior to 2007, there were at least a dozen subprime lenders in Canada and it was the fastest-growing sector of the entire mortgage market cornering about 5% of the total market.

But most of those lenders have either changed their business or closed up shop.

Compounding the dilemma is the fact that in the meantime the rules around home loans have been tightened and the federal government has raised the minimum down payment required for Canada Mortgage and Housing Corp. insurance.

So what's to become of all those Canadian subprime clients?

No one knows for sure how big the problem really is because there is no central database tracking these mortgages. In a Financial Post story this week, Ivan Wahl chief executive of Xceed (one of the biggest players in Canada until it recently converted to a bank) stated the subprime market in this country grew to about $11-billion in 2006, the year before things started to implode.

When the credit crunch hit, most of these US companies bailed out of Canada.

And what of the Canadians who had mortgages through these companies?

They were informed that their mortgages could not be renewed and as these companies were closing their subprime businesses, they would have to find another lender.

But the little lenders who had been so eager for their business back in 2005 have disappeared. That left the big banks and insurance companies, but they won't lend to these unqualified subprimers.

The end result... our own looming subprime-mortgage mess.

Industry insiders say that, as an estimated 30,000 so-called "orphan mortgages" reach maturity, these borrowers will have no choice but to default and trigger a flood of foreclosures.

"This thing is a wave and it's just starting," says Eric Putnam, formerly with a subprime lender, now managing director of Debt Coach Canada, a company that provides financial and bankruptcy advice to consumers.

Now the subprimer's are only a small portion of the huge Canadian mortgage pie, but so were the American subprimers.

And since the vast majority of these subprime loans were made around 2005 - 2007, it means they're coming due over the next two years.

Should we simply let them fail and default?

They don't qualify for CMHC insurance because they present a severe risk. But will allowing them to fail be one small domino that triggers a similar fate as the US experience - especially given housing prices will come under pressure from rising interest rates?

The mortgage industry is so concerned about the situation that it recently approached the federal government with a request for a bailout.

According to Mr. Putnam and others, it wants the federal government to participate in a $1-billion fund to help finance the coming flood of orphan mortgages.

And if these high risk, unqualified borrowers get CMHC insured mortgages, shouldn't other Canadians be entitled to the same treatment?

During the credit bubble, Canadian subprime lenders funded themselves through the asset-backed commercial paper market. The loans they made were packaged up and sold to securitization pools and then to investors in the form of ABCP.

But when the commercial paper market froze up in the financial crisis, lenders were suddenly left without a way to fund their businesses.

"Investors are no longer willing to continue on and these mortgages were not insured by the Canada Mortgage and Housing Corp., so the borrowers are not going to be able to move to another lender in today's environment," Mr. Putnam says.

It presents a disturbing dilemma for the Canadian taxpayer.