Richmond: another example from ground zero for the real estate collapse in Greater Vancouver

Richmond, for those outside B.C, is a suburb community of Vancouver (and home of the Lower Mainland's largest airport).

Situated on a river delta, Richmond's geography averages just one metre above sea level. Prone to flooding, especially during high tide, the City has grown up surrounded by a system of dykes, which, although not as massive as those in the Netherlands or the levees of New Orleans, serve to protect the City from anticipated sources of flooding.

But will residents of the infamous HAM suburb soon find themselves underwater in another sense of the word?

Last Saturday we profiled yet another property in what may well become ground zero for the bubble collapse in the Lower Mainland.

And the carnage continues.

In this week's version of the Weekly Drop, the blog Vancouver Price Drop gives us our next collapsing asset to profile from the island delta and it's back to Gibbons Drive again. 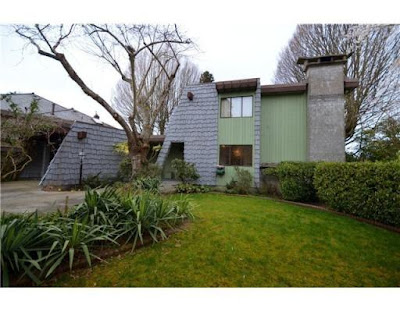 VALUE HAS AN ADDRESS and it is this fabulous custom designed 4 bedroom, 3 bath (plus den, family room and wrap around decks on both levels) home ON BEAUTIFUL GIBBONS DRIVE, AREA OF MILLION DOLLAR HOMES!

Here is a screenshot of the property listing so you can see it for yourself (click on image to enlarge): 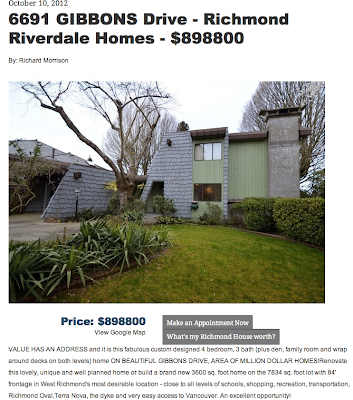 What did they just call Gibbons Drive - area of million dollar homes?

It would appear that Million Dollar Homes aren't what they used to be, at least in terms of financial value.

That's a plunge in value of $359,200 or 29% from the last government assessed value of the property... with no buyer in sight, meaning it will sell for even less.

Richmond, BC: a real estate disaster unfolding before your very eyes.


Please read disclaimer at bottom of blog.
Posted by Whisperer at 12:52 AM