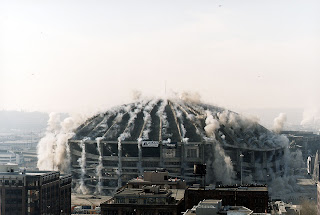 Richmond realtor James Wong takes a look at the evolving market conditions and comes to the stunning conclusion (for a realtor) that there are "strong signs for a prolonged market downturn." It has Wong asking, Are We Headed For a Housing Market Downturn?

Wong takes a look at the last downturn our market suffered and makes the following observations:

The last real estate cycle started around 1985 to reach a peak around 1994. It was a good 10 years run where average detached home prices in Greater Vancouver was just around $100,000. At it’s peak, home prices were at just over $420,000. The correction that took place was mild, reaching the bottom in 1998 with average price hovering around $360,000.

There were around 1,030 detached homes listed for sale with average monthly sale around 80 units. The months of inventory (MOI) recorded then was 12.9 months. The current supply/demand ratio for detached homes in Richmond is much worse than the beginning of the downturn in 1995.

Wong then looks at the current boom:

Wong then takes a stab at predicting where things might be going. He plots a “reverse image” of the Greater Vancouver price chart (with home price topping around March 2011). He yypothesizes how a down cycle for real estate might play out, including the duration and the extend of price decline that could happen the next few years (click on image to enlarge). 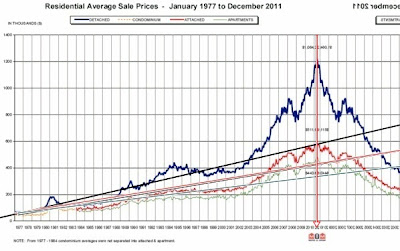 Wong then makes a stunning analysis for a realtor.  First he recognizes that the market should have strongly corrected in 2006 but didn't for the following reasons:

In spite of many new homes being added to the market each year, sales decline since 2006 was an ominous sign the housing market is ripe for a fall. Strong buying interest from Chinese from mainland China, easy credit and irrational market sentiment continued to drive home prices higher until 2011.

Then he summarizes EXACTLY what is going on:

We are now witnessing the unwinding of the housing market. The severity and pace of price decline are dependant on the interaction of buyers and sellers perception of the market. At current price point, getting financing for a family earning $65,000 a year with 5% down payment will allow the buyer to afford a home valued at $280,000.

It will take many years before owning a home makes sense again. Home prices are not going up now or holding. Instead, the housing market is coming down in values. The rush to exit the market will take its toll on sellers who bought their homes recently.

Wong has concluded the crash is underway and that values are going to drop dramatically to the point where owning a home makes fiscal sense again.