Who's policing dishonest BC Realtors? 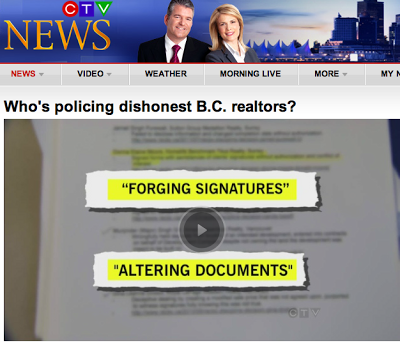 Lots of disscusion in our posts (see here and here) about CTV-BC's coverage of realtor Marco Vincenzi's forging of signatures and altering documents.  Apparently this was done in order to increase his commission on the sale of a yaletown condo.

In their third instalment of their coverage, CTV-BC asks 'Who's policing dishonest BC Realtors?' It's a poignant question, particularly in light of the MAC Marketing scandal we covered earlier this year.

After admitting to altering documents and other improper behavior, MacKenzie’s realtor (Marco Vincenzi) was ordered to pay a $1,250 fine, take a remedial course. He was also suspended for 120 days. The council took 16 months to make its decision. Said MacKenzie:

"To see this long drawn out secretive real estate council process that finally resulted in something that I think is just a slap on the wrist is insulting and angers me. It calls into question for me the actual ability of the real estate council to do their job and their mandate and uphold the public interest, rather than giving the perception that they're protecting the realtors."

What is particularly frustrating is the fact that MacKenzie also went to the Vancouver Police Department, who declined to proceed with a criminal investigation. Her case was ultimately reviewed by the Financial Crime Unit which felt the situation was better handled through a regulatory process rather than a criminal one.

And we've just seen how effective that was.

Even more galling was the fact that Vincenzi was allowed to continue selling real estate after the complaints were filed.  In virtually any other professional field, an individual accused of misconduct is placed on some form of administrative leave until individual is cleared of wrongdoing... and with good reason.

If the accused individual is, in fact, committing fraudulent acts... are you really going to let that person carry on committing the same (or worse) offences against innocent/unwitting members of the public?

It brings to mind the liars from the MAC Marketing scandal, who just so happened to dupe CTV-BC,  Despite having committed specific violations of the Realtor Code of Ethics, the infamous 'Chris Lee' is still selling real estate as the RECBC supposedly investigates (see here and here).

As MacKenzie says, it all "calls into question the actual ability of the real estate council to do their job and their mandate and uphold the public interest, rather than giving the perception that they're protecting the realtors."

It's gratifying to see CTV-BC finally begin to look at these issues.  But more needs to be done.

We asked Lynda Steele of CTV-BC about the status of the MAC Marketing investigations.  Here is our twitter exchange (click to enlarge): 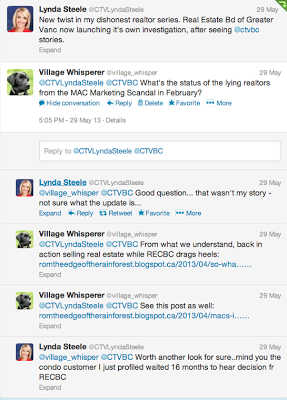 She says she thinks it's worth taking another look at. If you agree, let her know on twitter @CTVLyndaSteele or via email at Steeleonyourside@ctv.ca


Please read disclaimer at bottom of blog.
Posted by Whisperer at 8:41 PM