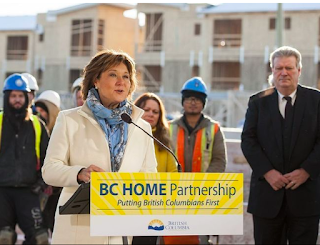 In the next day or so we will start to see the monthly real estate stats for January 2017 released. Early word is that they are ugly. Real ugly.

Part of that has to do with the brutal frankenumber HPI the industry uses. Critics have denounced the formula as a method to hide any collapse from the public... or at least hide it for a while.  Eventually any long term slide will become very evident and the chatter is that time has come.

Bearing the brunt of the blame has been the 15% Foreign Buyers tax implemented by the government of BC last September. This is now compounded by the recent capital controls announced by the People's Bank of China (PBoC).

With reports that high end developers are panicking and have threatened withholding political donations to the BC Liberal Party (crucial with an election looming in May),  the BC government had announced that starting Jan 16 a program was launched to oan first-time homebuyers some of the cash they need to afford their down payment.


The program provides a government-backed loan of up to $37,500, or five per cent, of the purchase price of a home for qualified buyers. The goal is to match part of a person's down payment to help them afford to buy their first home, as long as they already qualify for a mortgage under federal rules and the home is worth less than $750,000.

This attempt to shovel incentive money to first time buyers is being roundly denounced from all quarters nationwide.

And now we learn banks in BC are climbing back on the free money bandwagon.

Last week the Bank of Montreal (BMO) announced they are chasing first-time home buyers with a cash back mortgage promo. First-time home buyers taking out insured mortgages with terms of at least four years are eligible for $500 cash on mortgages of less than $250,000, and $1,000 on larger loans. Once the mortgage is booked, the cash is credited to the customer’s BMO chequing account.

In a statement, BMO called its new offer a “timely” companion to a new interest-free loan program British Columbia’s provincial government launched to help new buyers cobble together down payments amid soaring housing prices. The federal government recently expanded stress tests aimed at ensuring a home buyer could still afford a mortgage at higher rates, making it harder for some prospective buyers to qualify.

“While the provincial government’s offer is exclusive to B.C., our hope is to support all Canadians who come to us for this important milestone and investment,” said Michael Bonner, BMO’s senior vice-president and regional head for British Columbia and Yukon.

Of course sceptics might say it has less to do with 'supporting' Canadians and more to do with the fact that BMO has acknowledged that its residential mortgage portfolio in Canada, which totalled $103.6-billion in Canada as of Oct. 31, 2016, trails when compared with some key competitors.


Canada’s mortgage market is showing signs of slowing growth. Interest rates have risen from rock-bottom lows, consumers are heavily indebted, the federal government has introduced stricter rules on new mortgages in an effort to cool overheating prices in Toronto and Vancouver, the PBoC is implementing capital controls and the 15% Foreign Buyers tax was working far better than everyone imagined.

Now, it appears, there are massive efforts to plug the exact holes the changes were designed to create.


Please read disclaimer at bottom of blog.
Posted by Whisperer at 9:56 AM