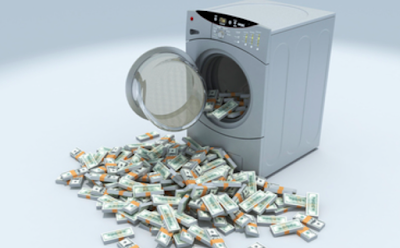 In case you missed them, there were two interesting articles written today by Ian Young, Vancouver correspondent for the South China Morning Post.

The first, in his "The Hongcouver" column (they say only Nixon could go to China... and only an Asian could get away with that title in today's PC world), headlines "A Vancouver firm offers clients 'new identities'. It's customers have included Chinese criminals"

It's news sure to add to Vancouver's reputation as a centre for laundering illegal money through our bubblicious Real Estate market.

One of Amicus' customers, which Young profiles, is Kuang Wan Fang. Writes Young:

Kuang’s husband, Xu Chaofan, and Yu’s husband, Xu Guojun, were involved in a massive scam to defraud their employer, the Bank of China, that lasted from 1991 until their arrest in the US in 2004. Together with a third BOC manager, they made off with at least US$485 million. They fled to the US via Vancouver, acquired US citizenship and laundered their cash through Canadian and Hong Kong banks, Macau and Las Vegas casinos, and the Vancouver and Toronto property markets.

According to the US indictment that would lead to all being convicted, the fraudsters used the stolen cash to buy at least three Richmond mansions, on Udy Road and Mang Road, that are now valued at about C$9.5 million.

According to Amicus, it helped get Kuang and Yu transferred into Spanish custody on September 23 and September 11, 2011, respectively; the US Federal Bureau of Prisons confirms that they did indeed leave US custody on those dates, although their destination is not listed.

Kuang’s movements between 2011 and 2015 are unclear. In the meantime, the BC Supreme Court ruled on April 16, 2015, that Kuang should repay BOC the entire stolen sum, now valued at C$670 million, which the RCMP said had been hidden and dispersed among 14 relatives, many living in the Vancouver area, according to The Province newspaper’s account of the case.

$670 million? One assumes more than a couple of $5 million + homes on Vancouver's west side were acquired with that tidy sum.

Young follows that up with a second article, "In landmark ruling, Vancouver homebuyer is ordered to repay millions to China’s Citic Bank" in which we are told about Chinese mainlander Yan Shibiao.

It seems China’s Citic Bank has won a landmark judgment in a Canadian court against Yan Shibiao and has ordered him to repay the bank RMB50 million (US$7.3 million), plus interest, that the bank says was spent in part on real estate in Vancouver.

The fact that a mainland Chinese bank has won a judgement in a Canadian court is causing a massive stir on local Chinese online internet chat boards.

China has been working with Canada for years to finalise a deal on the return of ill-gotten assets seized from those suspected of economic crimes. The agreement was originally announced in July 2013 and has not yet been ratified.

But this case marks a turning point. It's rare for Chinese banks to use Canadian courts to pursue those who have left the country and it sends a chilling message to Chinese nationals in Canada on visitor's visa's (which was Yan's situation).

Vancouver lawyer Christine Duhaime, an anti-money-laundering expert who represents Citic and originally petitioned the BC court on the bank’s behalf last year, said the case “shows China and their banks that [Canadian asset] recovery is possible in the civil context”.

“There are so many more cases with similar facts of foreign nationals from China who owe vast amounts of debt in unpaid loans that are parked in other countries, that I suspect the floodgates will open to pursuing recovery of those debts. Much of that money is in Canada,” said Duhaime in an interview.

We wonder what west side realtor Tom Gradecak's thoughts might be on these developments? 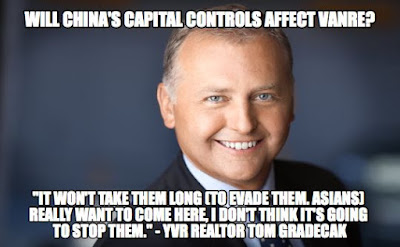 
Please read disclaimer at bottom of blog.
Posted by Whisperer at 11:45 PM