Cynicism? Krusty says, "Stand aside Moonbeam and hold my beer!" 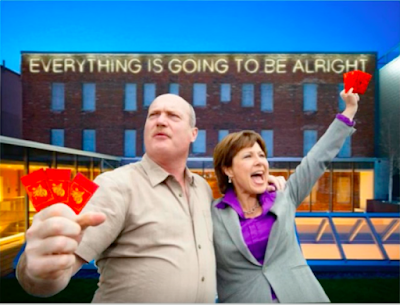 Yesterday we made note of the cynical populist political shift of our beloved Village Mayor Gregor 'Moonbeam' Robertson as he responded to the 2016 Census Data revelation that there were twice as many 'unoccupied' homes in Vancouver as the City's survey had found in mid 2016.

Said Moonbeam, “Seeing data that shows there may be even more underutilized homes than BC Hydro suggests gives us more reason to aggressively move on the empty homes tax, and other measures that will help bring homes back within reach to residents in all corners of the city."

Course, such exhortations are a little hard to swallow given his mid year pronouncement that he was against any suggestion of a housing tax targeting non-residents.

But is that real cynicism? Enter the BC Liberal's shouting "hold my beer!"

In July 2016 the BC Liberal's weren't afraid to support a housing tax targeting non-residents. In a surprising move, our beloved Premier Krusty Clark boldly declared a 15% tax targeting foreign buyers and implemented it without much warning.

Now everyone and their dog in the real estate industry (except this dog, of course) was feeding the public the line that foreign buyers were such a small portion of the market that all the fuss about them was a non-issue.

We all knew it was bullshit, but you have to wonder if the BC Liberals thought the tax would be a simple vote-getter without fully appreciating the reality of the situation.

By the end of January 2017, real estate sales in the Village on the Edge of the Rainforest fell off a cliff. Luxury sales were down 91% and Vancouver home sales plunged 40%. The market was cratering.

Did we mention a provincial election is less than 100 days away?

It didn't escape the attention of muckraking reporter extraordinaire Bob Mackin. Bob put his ear to the ground and heard that wealthy developer donors were letting it be known to Krusty, Shrimp de Jong et al that political donations would dry up if they didn't address this catastrophe. 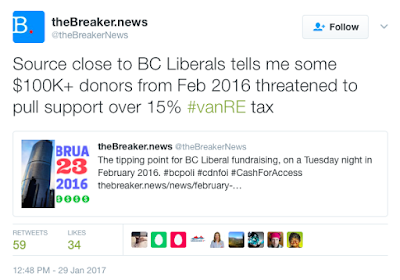 Such news was highly disconcerting to the BC Liberal accountants.

In a recent article, Mackin outlines how the BC real estate development community funnels massive amounts of cash to the BC Libs.

The Feb. 26, 2016 haul was thanks primarily to eight individuals and entities that kicked-in a whopping $1.1 million:

Those high rollers are no stranger to writing big cheques to the BC Liberals. Six months before the last election, some of them also injected six-figures into the BC Liberal kitty.


Peter Redekop — whose donations since 2005 now stand unofficially at $609,800 — gave $150,000 on Nov. 8, 2012. His brother John Redekop ponied up the same amount on the same day as a similar windfall from other real estate and construction concerns.

So it comes as no great surprise (albeit highly disappointing) that with the threat of having the taps turned off on this massive amount of cash that the BC Liberals blinked.

Thus, on Jan. 29, Krusty suddenly announced during Chinese New Year that the BC government would be amending its tax on foreigners buying property in Metro Vancouver. Clark says the levy will be lifted for "those who have a work permit and pay taxes in B.C., in order to encourage more people to come to the province."

The slight change to the Foreign Buyers tax was promoted as a minor adjustment to make the tax fairer so British Columbia can continue to attract the best and brightest to BC.

But given Mackin's revelations about the behind the scenes threats of withholding political donations as the province counts down to what could be another extremely close Provincial Election, it's hard to see the move as anything but selling out to the development community.

Next we will outline just how significantly the BC Liberals have gutted the tax.


Please read disclaimer at bottom of blog.
Posted by Whisperer at 8:16 PM